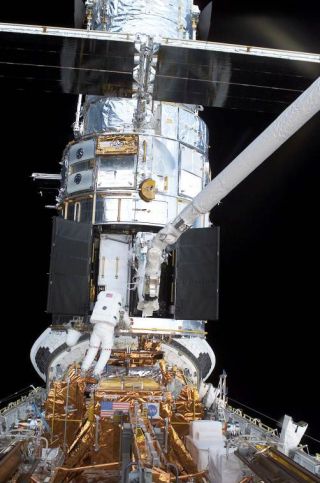 A White House decision to cut funding for a Hubble Space Telescope servicing mission and dump the observatory into a remote stretch of ocean waters at a future date is sure to incite debate in scientific, engineering, and policy making circles.

Intensive work has been underway at the NASA Goddard Space Flight Center to develop telerobotic servicing skills for the Hubble Space Telescope (HST) in the event that a space shuttle crew is never again sent to the orbiting facility. Aerospace firms in the United States and in Canada have teamed with NASA to develop a Hubble Robotic Vehicle Deorbit Module.

Either a robotic or shuttle-based servicing option reportedly would cost in excess of $1 billion. That pricetag is viewed by the White House, according to sources, as not affordable given other high-priority and more expensive efforts, such as the return-to-flight of the space shuttle program, as well as moving forward on NASA's Moon, Mars and beyond agenda.

White House plans to scuttle Hubble is part of NASA's 2006 budget request, sources said, with some money in the budget allocated to using a propulsion module coupled to Hubble for its safe but destructive deorbiting.

The cutting of the HST servicing mission from NASA's 2006 budget request was first reported by Space News on its website Friday and on  SPACE.com .

Senator Barbara Mikulski (D-Md.), a fervent Hubble supporter whose state is home to both the Goddard Space Flight Center and the Space Telescope Science Institute, issued a statement late January 21 in which she vowed to continue advocating an HST servicing mission.

"It is essential that we have a safe and reliable servicing mission to Hubble," Mikulski said, that is consistent with the findings of the Columbia Accident Investigation Board and last month's findings of a National Academy of Sciences (NAS) panel on the Hubble issue.

On December 8, in the NAS final report released by the Committee on the Assessment of Options for Extending the Life of the Hubble Space Telescope, a blue ribbon group of experts said that NASA should reinstate a space shuttle mission to refurbish the Earth-orbiting telescope.

"I led the fight to add $300 million to NASA's budget last year for a Hubble servicing mission, and I plan to lead the fight again this year. This is what the American people expect and deserve," Mikulski said in a statement.

In defense of Hubble

Response to the White House decision has engendered a wait-and-see attitude in some astronomical quarters, while others have been quick to react.

Hubble's best days lie ahead, predicted John Bahcall, a professor of natural sciences at the Institute for Advanced Study in Princeton, New Jersey. In 1998, he was a recipient of the National Medal of Science for his pioneering efforts in neutrino astrophysics and his contributions to the development and planning of the Hubble Space Telescope.

"President Nixon cancelled in 1973 the Hubble Telescope while it was still in the development phase. The reason was similar: other activities in the NASA budget took priority," Bahcall told SPACE.com. "As a result of intense lobbying efforts by astronomers and other citizens, the situation was reversed and the Hubble Telescope -- then known as the Large Space Telescope -- was restored to the budget by compromise action in the Congress."

Bahcall said that Hubble has contributed enormously to scientific knowledge and to America's respect abroad. The telescope represents achievements of which all Americans can be proud, he said.

"I am confident that Americans of all walks of life will come to the defense of the Hubble and cause the Congress to restore the repair of the telescope to the NASA budget," Bahcall said.

Excellent progress is being made on a telerobotic approach to servicing the Hubble, said Jim Crocker, vice president of civil space at Lockheed Martin Space Systems of Denver. The firm has supported NASA's planning and then repair and servicing of the HST via four space shuttle missions to date.

The telerobotics team at work at Goddard Space Flight Center "have a good shot at pulling this off," Crocker told SPACE.com the day before the Space News story on the White House HST decision appeared.

Lockheed Martin's role in the rocket-launched Hubble Robotic Vehicle Deorbit Module (HRVDM), Crocker said, is providing all the sensors to do the rendezvous and docking with the Hubble, as well as provide the liquid-fueled propellant module that would later deorbit the telescope.

For their part, Canada's MacDonald, Dettwiler and Associates (MDA) Ltd. -- through its MD Robotics group in Brampton, Ontario -- is providing the Dextre robot that's part of the HRVDM. It is being specially configured to replace batteries, gyroscopes, and perhaps an instrument on the HST to extend its life.

Crocker said that simulations performed at NASA's Goddard Space Flight center have converted doubters, including him, that performing many of the scheduled Hubble servicing tasks through the tender loving care of telerobotics is feasible.

"That's not to say it's not challenging," Crocker said, "but the team is making a convincing story."

Rabbit out of the hat

There's also good news to report in keeping Hubble in an operating mode. Worry centers on HST's gyroscopes, batteries, or other gear that might fail early, negating the observatory's useful lifetime.

"The team continues to pull rabbits out of the hat," Crocker said. For instance, a two gyro science mode, along with the needed software has been worked out. HST's original design had to have three gyros working to do science. Additionally, a new battery management approach is being adopted.

At the end of the day, Crocker concluded, whatever option is decided upon for Hubble servicing and its ultimate reentry, "everyone on the team wants the best chance of success possible."