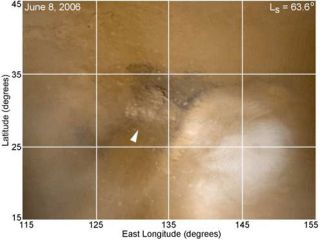 Dust storm imaged by the Mars Orbiter Camera in a region just northwest of Elysium Mon June 8, 2006. Shadows on the northeast side of storm indicate that the dust cloud reaches at least 22 miles (35 km) above the surface. The white arrow indicates the location of the storm.
(Image: © Ruf, et al., GRL)

The first detection of lightning in a Martian dust storm haslikely been made by a new detector on a radio telescope.

Scientists have long thought that as with dust devils and stormshere on Earth, Martiandust storms should produce lightning. But direct evidence of electricdischarges on the red planet was lacking.

That's where an innovative detector installed in a 34-meterradio telescope in the Deep Space Network lent a hand.

This detector captured the signature of the radiation givenoff by the lightning for a few hours during a Martian dust storm on June 8, 2006.

"We saw the lightning," said Christopher Ruf ofthe University of Michigan in Ann Arbor, who first developed the new detector for use on Earth-orbiting weather satellites.

While lightning was expected to occur on Mars, "it wasa surprise that the signal was so strong," Ruf told SPACE.com.

The lightning wouldn't look quite like whatwe see on Earth during a thunderstorm ? "It wouldn't likely be the biglightning bolts," Ruf said, instead it would look more like a glow in theclouds, akin to so-called heat lightning here on Earth.

The dust storm the lightning was detected in was a majorone, measuring 22 miles (35 kilometers) deep, but "it should be there insmaller storms" too, Ruf said.

"These dust storms happen all the time there," headded.

The lightning isn't a major worry for the rovers currently on the Martiansurface (or any future robotic or human explorers), because to cause a problem,the discharge would have to occur in the cloud right at the location of therover.

But the lightning could cause chemical reaction that affectthe chemistry of the Martian atmosphere and surface, creating caustic compoundsthat would affect human equipment and would have to be factored into designs,Ruf explained.

Another intriguing consideration is how lightning mightaffect the possibility of past or present life on Mars. Life is more likely tooccur with lightning than without, Ruf said, because electric currents make formore complex molecules, but Ruf isn't holding his breath.

Scientists are working to install more sensitive detectorson telescopes to see if they can make more measurements of Martian lightning inthe future.

Ruf and his colleagues detailed their observations in theJuly 11 issue of the journal Geophysical Research Letters.