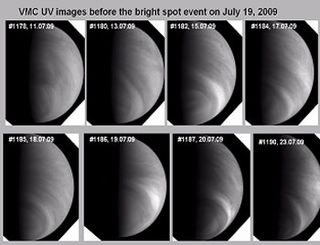 A suddenbright spot that appeared in the clouds of Venus just days after a comet left abruise on Jupiter has scientists stumped as to its cause.

Venus'bright spot, first noticed by amateur astronomer Frank Melillo of Holtsville, NYon July 19, is not the first such brightening noticed on our cloudy neighbor,said planetary scientist Sanjay Limaye of the University of Wisconsin-Madison.

"Wehave seen such events before," he told SPACE.com.

This timeis a little different though because the brightening is confined to a smallerregion, Limaye said. It also came in the wake of Jupiter's ownnew (dark) spot, believed to be the result of a comet impact ? Limayeattributes the fortunate confluence of the two events for the attention Venusis now getting in the astronomical community.

AfterMelillo reported the spot, other amateur astronomers and the European SpaceAgency's (ESA) VenusExpress spacecraft confirmed the presence of the blemish.

The newVenus Express images show that the bright spot actually appeared in theplanet's southern hemisphere four days before Melillo saw it and that it hassince begun to spread out, becoming stretched by the wind's in Venus' thickatmosphere.

But justwhat caused the brightening is still a mystery. Theories have abounded, from avolcanic eruptionto solar particles interacting with the planet's atmosphere.

Limaye saysthe volcano explanation is unlikely, for several reasons: Volcanoes on Venusseem to be less likely to blow their tops in Mount St. Helens-type fashion,instead behaving more like the oozing lava factories of Hawaii, so theireruptions wouldn't likely produce huge clouds of ash and steam. Also, it isunlikely that the explosions would have the power to push through to the otherlayers of Venus' extremely dense atmosphere.

Limayedoesn't completely rule out the possibility, however. "It's possible, wejust don't know," he said.

Anotherexplanation is that a coronal mass ejection (an energetic plume of plasma fromthe sun's corona) or the solar wind could have interacted with the clouds ofVenus.

These"could cause something, we don't know what," Limaye said.

Yet anotherpossibility is some internal change in Venus' atmosphere that could alter cloudparticles and make them more reflective (and therefore brighter as viewed fromspace).

Even thoughthese events have been seen previously, most notably in Jan. 2007, our limitedknowledge about the workings of Venus' atmosphere and lack of enough spacecraftto comprehensively study the planet hasn't narrowed down the list of possiblecauses, Limaye said.

"Rightnow, I think it's anybody's guess," he said.