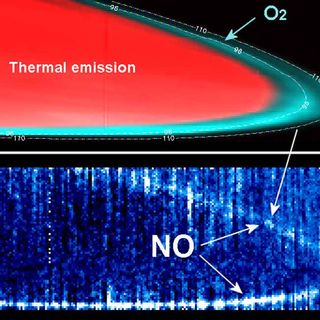 A view of nightglow from Venus Express. The top shows the oxygen nightglow at about 60 miles over the surface of Venus, while the bottom shows the weaker glow of nitric oxide 68 miles up.
(Image: © ESA/VIRTIS/INAF-IASF/Obs. de Paris-LESIA)

An eerie nightglow on the planet Venus has appeared atleast twice to a European spacecraft, though a human would need infrared eyesto spot it.

Previously-reported glows have revealed the chemicalbreakdown of Venus' atmosphere. But this latest sighting represents a newlydiscovered nightglow caused by nitric oxide in the planet's atmosphere, and hasproven useful for observing Venus' atmosphere.

"The nightglow can give us a lot of information,?said Antonio Garcia Munoz, a former researcher at Australian NationalUniversity who has since relocated to the Instituto de Astrof?sica de Canariasin Spain. "It can provide details about the temperature, wind direction,composition and chemistry of an atmosphere."

Europe's VenusExpress spotted the nightglow with its Visible and Infrared Thermal ImagingSpectrometer (VIRTIS) instrument to record the nitric oxide levels on theplanet below. On Earth, the molecule can be found as a pollutant from cigarettesmoke, car emissions and power plants

The phenomenon speaks to the ongoing violence of thesun's ultraviolet light pummelingthe planetary atmosphere, which breaks up molecules into simpler moleculesand atoms. Chemical fragments may recombine into molecules such as nitricoxide, and give off energy in the form of light during the recombination phase.

Sunlight normally outshinesany faint glow on the day side of Venus. But the dark side provides ampleopportunity for Venus Express to catch an infrared show. Nitric oxide has alsomade a showingon Earth and Mars in the shorterultraviolet range, as opposed to infrared.

Previous Venus nightglows from oxygen and hydroxylmolecules have been detected from 56 to 62 miles (90-100 km) up in the planet'satmosphere. Nitric oxide light emissions have appeared slightly higher at the68 to 75 mile (110-120 km) range.

"Luckily for us, Venus has a temperamentalatmosphere," Munoz said. "Packets of oxygen and nitrogen atoms areblown around."

He explained that the whirling collection of atomssometimes became dense enough to boost the brightness of nightglow and make itvisible to VIRTIS. Venus Express can even pick up on all three types ofnightglows simultaneously.

However, when and why each of the three nightglowsappears remains a mystery fornow. Full results on this research appear in the January issue of thejournal Proceedings of the National Academy of Science.