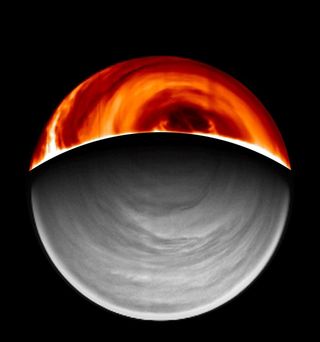 This animation of wind circulation on Venus is composed of images taken by the Visual and Infrared Thermal Imaging Spectrometer (VIRTIS) on board ESA’s Venus Express between April 2006 and June 2007. The night-side of the planet is at the top in infrared, with the day-side at the bottom.
(Image: © ESA/VIRTIS/INAF-IASF/Obs. de Paris-LESIA/ Universidad del País Vasco (R.Hueso))

Veiled Venus just got a little less mysterious in a new3-D view that showcases the planet's powerful winds.

The European Space Agency's Venus Express spacecraft trackedcloud movements hidden within the murkydepths of Venus' southern hemisphere, and scoped out the hugehurricane-like vortexes spinning over the planet's poles.

"Tracking them for long periods of time gives us aprecise idea of the speed of the winds that make the clouds move and of thevariation in the winds," said Agustin Sanchez-Lavega, a planetaryscientist at the Universidad del Pais Vasco in Bilbao, Spain.

An instrument called the Venus Express Visual andInfrared Thermal Imaging Spectrometer (VIRTIS) peered at visiblecloud motions at the upper altitudes during the day, and switched to the infraredrange of light to see lower cloud movements at night.

Wind patterns changed drastically near the hurricane-likeweather of the poles. Winds of roughly the same speed pushed clouds at allaltitudes, although the speed dropped to almost zero at the center of the giantvortex.

For the first time, Venus Express also uncovered avertical map of the zonal winds, or winds that blow parallel to the lines oflatitude. The zonal wind speeds blow more strongly in the evenings on Venusbecause of the difference in the sun's heat, also called the solar tide effect.

The Venus Express team chose to examine the southernhemisphere because the spacecraft reaches its highest point in orbit there, at41,000 miles (66 km) above the planet.

"At present we cannot observe the northernhemisphere with the VIRTIS instrument," Sanchez-Lavega said. "Ifthere is a second extension of the mission, we could reach the north. Withother instruments, in particular with the Venus Monitoring Camera, part of thenorth is available for the measurement of cloud motions."