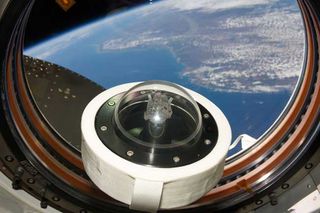 A moon rock brought to Earth by Apollo 11, humans' first landing on the moon in July 1969, is shown as it floats aboard the International Space Station. Part of Earth can be seen through the window. The 3.6 billion year-old lunar sample was flown to the station in honor of the July 2009 40th anniversary of the historic first moon landing. It was returned on shuttle mission STS-128 to be publicly displayed.
(Image: © NASA)

A moonrock, which is currently onboard the International Space Station (ISS) to markthe 40th anniversary of the first manned lunar landing on July 20, 1969, willreturn to Earth at the end of this month to await its next mission: the UnitedStates' next trip to the moon.

The 21 gram(0.7 oz) moon rock, which as collectSPACE.com first reported was secretly launchedto the space station in March 2009, was ultimately revealed by NASA duringa celebration of the Apollo program held 40 years to the day after Neil Armstrongscooped the lunar sample from the moon's surface for its return to Earth.Appearing at the National Air and Space Museum-hosted event through a pre-recordeddownlinked video, ISS Expedition 20 flight engineer Michael Barratt debutedthe moon rock before the invited audience, which included Armstrong and hisApollo 11 crewmates Buzz Aldrin and Michael Collins.

"Thisrock was brought by the space shuttle Discovery here, to the InternationalSpace Station, the first stop in America's return to the moon," saidBarratt while floating inside the station's Harmony module. "It wasbrought here as a symbol of NASA's resolve to successfully carry out America'splan to build a new generation of spacecraft for a new generation ofexplorers."

Under NASA's current plans, Orion capsules will liftoff on AresI rockets with four astronauts destined for the space station or otherdestinations, including the moon. In May, President Barack Obama commissionedan independent review of those plans, which call for humans to be back on themoon in the 2020 timeframe, with the results due out this September.

The moonrock will return to Earth before then, aboard the space shuttle currentlydocked with the ISS. Endeavour and its STS-127 crew are presently slated toreturn to Earth on July 31, after which the rock will go on display to remindNASA's workforce "what can be achieved with innovation and sheerwill," said Barratt.

"This rock will also be displayed around the country to serve as a symbolfor all Americans of the fortitude of our nation as we press forward inspace," he added.

Ultimatelythough, the lunar basalt, or lava, rock's display will be biding the time forits next launch.

"When Americans return to the moon, a piece of this rock will go with themto be returned to its home," announced Barratt from aboard the ISS."It is an important reminder that America's commitment to humanexploration did not end with the twelve astronauts who walked on the lunarsurface. Apollo was just the beginning."

Click through tocollectSPACE.com to watch Michael Barratt'scomments about the moon rock from aboard the International Space Station.