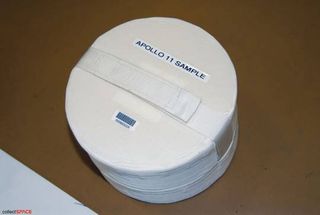 Stowed aboard Discovery during the STS-119 launch on March 15, 2009, the moon rock inside its case was in turn packaged inside a padded container labeled "Apollo 11 sample".
(Image: © collectSPACE.com/NASA)

Forty yearsto the day after it was found and collected by Neil Armstrong, a moon rock ishelping NASA mark the anniversary of the first lunar landing from onboard a perchthat is closer than any Apollo-returned lunar sample has ever come to itsoriginal home in decades.

Aswas learned exclusivelyby collectSPACE.com, the moon rock was secretly launched aboard a March2009 space shuttle mission to the International Space Station (ISS), where onMonday night it will be revealed during a NASA 40thanniversary celebration of the Apollo program at the National Air and SpaceMuseum in Washington, DC.

The 21 gram(0.7 oz) moon rock is only the second out of the 842 pounds (382 kg) of lunarsamples collected by the Apolloastronauts between 1969 and 1972 to be launched back into space. And thoughits journey is planned as a round trip - it will return to Earth as it camewith a future shuttle mission - the rock's return to space symbolizes in partNASA's current effort to return astronauts to the Moon.

To keep themoon rock's launch a secret, NASA limited the number of people who were in theknow, including within the special laboratory where the agency keeps and preparesthe moon rocks for scientific study, educational display and the occasionaltrip into space.

The agencydid not however, circumvent its established system for readying items to go toorbit.

"Thiswas not a deeply organized 'Operation Moon Rock' project," explained BobJacobs, NASA's acting assistant administrator for public affairs, in an e-mailinterview with collectSPACE.com. "It is not unusual for us tomanifest items for various education and outreach purposes. We followed thesame procedures."

Indeed, aspre-launch photos obtained by collectSPACE.com reveal, the rock wasprepared and packaged alongside other supplies heading to the station aboardspace shuttle Discovery's STS-119 mission. In one photo, a package of cherry licoricecandy intended for a station crew member is lying by the moon rock carrier'sside.

Althoughprocedures existed to launch items to the space station, the same could not besaid for how to prepare - or pick - a moon rock to go back to space.

The ideawas first put forward by the few among NASA's public affairs staff who wereaware of the project to Dr. Gary Lofgren, a senior planetary scientist and theLunar Curator at the LunarReceiving Laboratory at the Johnson Space Center in Houston. Lofgrenrecounted what his first reactions were of the idea to collectSPACE.com.

"Ooh,that's an interesting idea. I wonder if we should do that? Hmm ... well, thatmight be good publicity," recalled Lofgren.

It wasn'thowever, his decision to make.

"Wehave a charter committee of scientists that reviews all the requests for lunarsamples from a scientific point of view. If they don't approve of it, itdoesn't happen," he explained. "In the end, they decided to go aheadand do it."

Lofgren did choose the rock to be used.

Continuereading at collectSPACE.com to learn what moon rock waschosen to fly and see photos of the rock before flight and its other piece thatremained on Earth.

Forty years after astronauts first set foot on the moon,SPACE.com examines what we?ve done since and whether America has the rightstuff to get back to the moon by 2020 and reach beyond. Editor?s note: This article was corrected toacknowledge that the Apollo 16 mission in 1972 returned to the Moon's surface alunar sample collected earlier by the Apollo 12 crew as part of an investigationinto the Moon's magnetic field.