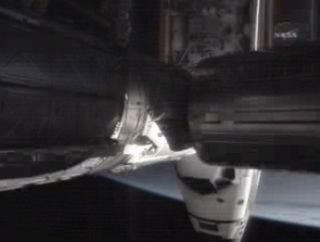 The space shuttle Endeavour is seen docked at the International Space Station after arriving on July 17, 2009 during NASA's STS-127 mission.
(Image: © NASA TV.)

The long-awaited crew of the space shuttle Endeavour finallyarrived at the International Space Station Friday to begin a two-weekconstruction visit.

Endeavour is more than month late because of launch delays.It pulled up to the station's Harmony Node 2 at 1:47 p.m. EDT (1747 GMT),bearing seven astronauts and some new hardware for the outpost. The shuttle launchedWednesday and spent two days playing orbital catch-up with the station.

Astronauts are scheduled to open the hatches between the twospacecraft at 3:43 p.m. EDT (1943 GMT). When the newcomers join the existingInternational Space Station (ISS) crew of six, the totalpopulation onboard will be a record 13.

Kopra is set to replace Wakata as an ISS Expedition 20flight engineer, while Wakata will ride home aboard Endeavour in his place.

Despite the imminent crowding on the station, thetwo crews are looking forward to seeing each other again.

"I'm sure there's going to be a lot of emotion as yousee your friends up there and it's always an exciting time to do that,"Polansky said in a preflight interview. "And then after about five minutesof, 'Boy, this is really cool!' back to work."

Before Endeavour docked at the space station, Polansky guidedthe orbiter through a backflip so astronauts inside the station couldphotograph the heat shield tiles lining its belly. The maneuver is anow-standard part of NASA's shuttle heat shield inspections to look for signsof damage from launch debris.

During Endeavour's launch, the shuttle's fuel tank lost an unusualamount of foam from its external tank. Some minor nicks to tiles were alsoseen.

The two crews have a busyschedule planned for Endeavour's 11 days docked at the station. A primarytask is to install a new outdoor experiment platform on the Japanese Kibolaboratory. The segment - used to expose science projects to the spaceenvironment - will complete the huge Kibo complex. Endeavour's crew also plansto unload a cache of spare supplies on the station to keep the outpost runningafter the shuttle fleet retires, planned for 2010.

For the six long-duration station crewmembers awaiting theshuttle, the influx of new faces and supplies will be very welcome.

"We're hoping to get some fresh mail and some freshfruit, and it's a great crew that's coming up and we're really looking forwardto working with them," Barratt said in a NASA interview.