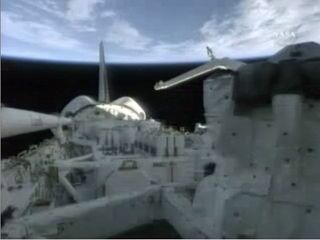 The space shuttle Endeavour soars high above Earth, which can be seen at the top of this view from a payload bay camera. The shuttle's robotic arm is extended at right. The inspection boom for heat shield survey extends along the left side.
(Image: © NASA TV.)

CAPE CANAVERAL, Fla. - Astronauts aboard the space shuttle Endeavour will scan their orbiter's heat shield on Thursday to search for any damage from debris that fell from the spacecraft's external tank during its launch into orbit.

A camera mounted on Endeavour's fuel tank recorded eight or nine pieces of debris — either ice or foam — that appeared to fall free during the shuttle's late Wednesday launch, though mission managers do not yet know if they caused any harm. Endeavour lifted off from NASA's Kennedy Space Center here on a mission to the International Space Station, triumphing after a string of delays caused by weather and a gas leak.

"We had some foam loss events," said Bill Gerstenmaier, NASA's space operations chief. "There were probably a couple orbiter hits prior to the aerodynamic sensitive transportation time - that's the time when we could potentially get damage to the shuttle. All the tools we've got in place for foam loss and understanding what occurred will be in place and we'll go look at those through ascent."

Endeavour is slated to catch up to the International Space Station Friday to begin a complex 16-day construction mission to install a porch-like science platform,  the final segment of the outpost's Japanese Kibo laboratory, and a host of spare supplies for the station.

The shuttle flight launched just ahead of the liftoff anniversary for NASA's historic Apollo 11 mission, which blasted off 40 years ago today to send three Americans to make the first-ever manned landing on the moon. The Endeavour astronauts will be in space Monday for the anniversary of the actual moon landing, which occurred on July 20, 1969. (NASA is broadcasting real-time audio of the Apollo 11 launch and mission here: http://www.nasa.gov/externalflash/apollo11_radio/).

Shuttle commander Mark Polansky and the other six astronauts aboard are due to begin their survey at 12:38 p.m. EDT (1638 GMT) using a sensor-tipped inspection pole to sweep the sensitive heat shield panels lining the orbiter's wing edges and nose cap.

The meticulous scan should help determine whether the orbiter is safe to fly home through Earth's atmosphere by seeking out any damage from launch debris. A similar scan will be performed near the end of Endeavour's flight to look for dings from space junk and micrometeorites. Astronauts aboard the space station will photograph the thousands of tiles on Endeavour's belly before the shuttle docks to complete the heat shield health check.

The inspections have been a standard part of shuttle mission since the loss of Columbia and its seven-astronaut crew in 2003. A piece of foam debris damaged Columbia's heat shield during launch, leading to its destruction during re-entry.

"It's very intensive, takes a lot of time and a lot of attention so three of us will be doing that," Polansky said in a preflight interview. "In the meantime, the rest of the crew will be getting ready for what they're going to be primarily accomplishing, which are the spacewalks."

The rest of the crew plans to gather the gear needed for the mission's five planned spacewalks, including the spacesuits and tools. That equipment must be checked out to make sure it is working properly, and readied to be transferred into the space station when the shuttle arrives.

"It's a long, extensive process to double check that, make sure that everything is in the same configuration as when they launched it, and nothing got rattled out of place with the dynamic environment of the launch and get things set up for the next day when we rendezvous with the station and open the hatches," said mission specialist Chris Cassidy. "We need to immediately get going for a campout in preparation for the next day's [spacewalk]. So in large part that second day is making sure we're ready for the rendezvous."