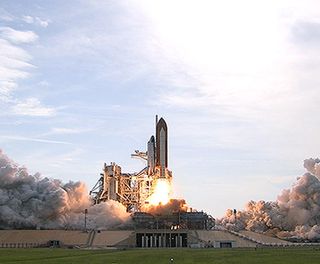 The space shuttle Endeavour blasts off from Launch Pad 39A at NASA's Kennedy Space Center in Florida on July 15, 2009 after five false starts to begin the STS-127 mission to the ISS.
(Image: © NASA TV)

CAPECANAVERAL, Fla. - The space shuttle Endeavour finally beat the weather lateWednesday as it blasted off on an ambitious, if belated, construction mission to theInternational Space Station after five frustrating delays.

Running amonth late, Endeavour roared into the Florida evening sky at 6:03 p.m. EDT(2203 GMT) from Launch Pad 39A here at the seaside Kennedy SpaceCenter. The orbiter is ferrying sevenastronauts, vital spare equipment and a Japanese-builtexperiment porch to the orbital outpost.

?Endeavour?spatiently waited for this,? replied shuttle commander Mark Polansky.??We?reready to go and we?re going to take all of you with us on a great mission.?

The sevenastronauts aboard Endeavour are not going quite as far as the Apollo 11crew. They are headed for the International Space Station about 220 miles (354km) above Earth to deliver vital spare equipment and a Japanese-builtexperiment porch to the orbital outpost.

Missionmanagers cleared Endeavour to fly today after fears surfaced that one of theshuttle's power-generating fuel cells was malfunctioning. A faulty cell is nota risk for launch, but could shorten the planned 16-day mission if it cannotprovide power for as long as planned. After subsequent checks suggested thefuel cell was functioning within normal limits, NASA decided to go ahead withlaunch.

The eveningliftoff capped a series of setbacks that had waylaid Endeavour and its crewsince mid-June. Lightning and thunderstorms foiled three launch attempts overthis last week, while two earlier attempts in June were thwarted by a hydrogengas leak from a vent pipe on the shuttle's external fuel tank. That glitch waslater repaired

Endeavour'screw has an elaboratemission lined up with five spacewalks and complex robotic arm maneuvers to installnew hardware on the space station. The shuttle is slated to catch up with theorbital outpost on Friday at 1:55 p.m. EDT (1755 GMT).

"STS-127to the International Space Station has an array of objectives," Endeavourmission specialist Dave Wolf said in a preflight interview. "It?s heavy onspacewalks and robotics and we?ll be doing a fair amount of re-supply insidethe space station, so there?s a broad mix of activities."

Cassidywore an inside-out baseball cap as a rally hat for good luck before launch,while Payette blew a kiss to cameras before entering Endeavour.

NASA rookiespaceflyer Tim Kopra will also ride the shuttle to the station, where he willreplace Japanese astronaut Koichi Wakata as a long-duration flight engineerwith the orbiting lab?s six-man Expedition 20 crew. Wakata is due to cap offhis station mission and fly home on Endeavour with the STS-127 crew.

When theshuttle arrives at the space station, the outpost will be more crowded thanit's ever been, with a record 13 people onboard.

"Everyoneknows what it?s like to host your in-laws or other family members and friendsover to your home during the holiday season for several days," Thirsk saidin a preflight interview. "Everyone loses some personal space; there aresome inconveniences; there?s line-ups at the phone; there?s line-ups at thecomputer; there?s line-ups at the bathroom; and even the preparation of, andthe serving of, meals is something that needs to be tightly coordinated. We?regoing to experience the same types of things onboard the space station."

Packed intothe shuttle's payload bay is an externalporch-like facility for the station's $1 billion Japanese Kibo Laboratory.The porch will expose science experiments to the space environment. The newaddition will complete the Kibo complex, the largest laboratory on theInternational Space Station (ISS).

Endeavour'scargo also includes a cache of other equipment, including spare parts to keepthe space station going after the shuttle program retires, planned for 2010.

"STS-127,I like to say, is one of the last major construction missions of theInternational Space Station," Payette said in a NASA interview."We?re hoping that in two years from now it will be all complete and fullyutilized as a scientific laboratory in space."

WhenPayette arrives at the station she will reunite with her Canadian colleagueRobert Thirsk, who is a month and a half into a long-duration stay on the ISSas an Expedition 20 flight engineer. It will be the first time two Canadiansare in space at the same time.

"For ashort period of time we'll have two Canadians on orbit, and we are reallypleased about that," said Pierre Jean, Canada's space station programmanager. "I think it will generate a fair amount of excitement [amongCanadians]."

The shuttlecrew plans to spend their second day in space conducting a detailed scan oftheir orbiter's sensitive heat shield for any damage sustained during launch.

Endeavour'sflight is NASA's third shuttle mission of 2009, and follows a May mission bythe shuttle Atlantis to the Hubble Space Telescope. Today's blast off was the23rd for Endeavour's and marks the 127th shuttle mission ever. NASA plans tolaunch seven more shuttle flights by 2010 to complete station construction andthen retire its three-orbiter fleet to make way for its replacement, the Orionspace capsule and its Ares I booster.

Endeavourand its crew are slated to return to Earth July 31 after completing theirmission to the International Space Station.