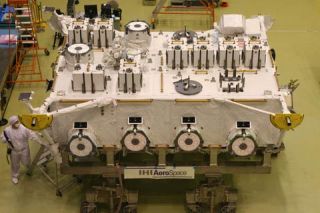 The Japanese Exposed Facility being prepared at the Tsukuba Space Center in Japan.
(Image: © JAXA)

The International Space Station's Kibo laboratory is about to get a new porch, the last big piece of the outpost's already massive Japanese-built segment.

The porch — a platform for science research that will be placed outside the station to expose experiments to the space environment — is set to be delivered by the space shuttle Endeavour's STS-127 mission.

Endeavour is slated to launch Saturday at 7:17 a.m. EDT (1117 GMT), and dock at the orbital laboratory June 15. The shuttle currently has a 90 percent chance of good weather for launch, mission managers said. Astronauts plan to install the porch, officially called the Japanese Exposed Facility, during two of the five planned spacewalks set for their marathon 16-day mission.

"It's a large external porch to the space station where high quality experiments can be conducted in high vacuum of space," said STS-127 mission specialist Dave Wolf in a NASA interview. "It's really an exceptionally valuable piece of real estate being produced in outer space. It has its own robotic arms, the ability to do observations of the Earth and of the sky, astrophysics experiments, a very wide range of abilities."

The exposed facility is just over 18 feet (5.6 meters) wide, 16 feet (5 meters) high and 13 feet (4 meters) long, and can hold up to 10 experiments at a time. Astronauts can manipulate the outdoor experiments from within the space station via a special robotic arm and use a small airlock to move materials out to the porch.

The porch is the last major element of the $1 billion Kibo Laboratory, the main Japanese contribution to the space station. The previous elements were delivered during two shuttle flights last year. In English, Kibo's name means "Hope."

"For Japan it's a very important mission to complete the assembly of the Kibo module on the ISS," said Japanese Aerospace Exploration Agency astronaut Koichi Wakata, who is wrapping up a three month-stay aboard the space station. "It's over 20 years since Japan started to work on this project. I think taxpayers deserve to see us get to the next level, which is the utilization of the International Space Station."

Research inside the pressurized part of Kibo has already begun, and experiments are set to start on the porch soon after it is installed. As Japan's first long-term resident aboard the station, Wakata has overseen the Kibo lab's systems during his stay.

In addition to the main exposed platform, Endeavour will also deliver a pallet with three science experiments, including an astronomical observatory that will monitor X-ray spectra from the station, and an instrument to measure particles such as heavy ions, high-energy light particles, and cosmic dust in the space environment.

"This is a milestone for us, moving from assembly phase to operation phase," Tetsuro Yokoyama, deputy project manager for the Kibo operations team, said in a preflight briefing.

The experiments are overseen by Japanese mission control at the Space Station Operations Facility at Tsukuba Space Center in Ibaraki Prefecture, Japan.