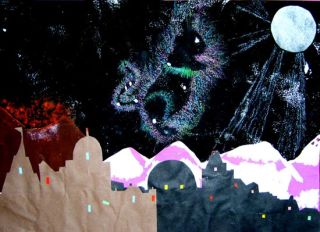 The new (temporary) constellation 'Wee Sleekit Beastie' or 'Ode to a Mouse' created by Laura, a year 7 pupil at Dalmeny Primary School, Edinburgh.

The nightsky has a new, albeit temporary, constellation: a mouse dubbed ?Wee SleekitBeastie? by a Scottish schoolgirl.

The mousewas the winning entry for a competition to design a new constellation for the InternationalYear of Astronomy (IYA 2009), which is this year.

The mouse(whose named means "Ode to a Mouse") was created by Laura, a year 7pupil at Dalmeny Primary School in Edinburgh. She received the award from LizLochead, the Scottish Poet Laureate, in a ceremony in the planetarium atGlasgow Science Centre on Tuesday.

In theConstellation Project for IYA 2009, 8 schools across the country were linked toan important astronomy site and selected a star whose distance in light yearscorresponded to the site's age. For example, children at Coupar Angus Primary School were linked to the Mills Observatory in Dundee, built in 1935. Their star,Aldebaran is 65 light-years away, so the light observed began shining a littleafter the observatory opened.

Thechildren at the eight schools used the eight selected stars as the frameworkfor their constellations.More than 200 pupils sent in entries.

At thepresentation ceremony, Lochead recited her poem "From a Mouse" andthe giant mouse constellation, and other winning entries, were projected on theplanetarium dome.

"Scienceis fun and extremely fascinating. There is so much to learn. Astronomy is mymain interest now and I will stick with it for life I hope," Laura said.