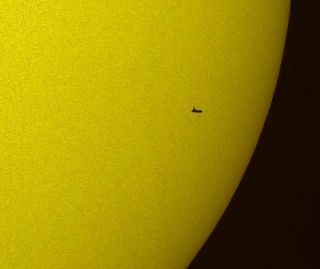 In this tightly cropped image, the NASA space shuttle Atlantis is seen in silhouette during solar transit, Tuesday, May 12, 2009, from Florida. This image was made before Atlantis and the crew of STS-125 had grappled the Hubble Space Telescope.
(Image: © NASA/Thierry Legault)

HOUSTON ? Stunning new images reveal the space shuttleAtlantis and the Hubble Space Telescope as the two spacecraft were silhouettedby the sun earlier this week.

The images were taken on May 12 and May 13 by photographerThierry Legault before Atlantis astronauts grabbed onto Hubble with theshuttle?s robotic arm to begin a series of challenging spacewalks to overhaulthe space telescope for the fifth and final time.

The spacecraft were zooming around Earth at 17,500 mph(28,163 kph) at an altitude of nearly 350 miles (563 km). Both spacecrafttransited across the face of the sun in 0.8 seconds, according to Legault.

The two spaceships appear as tiny dark pinpricks on theexpansive face of an otherwise unblemished sun. But in tightly cropped shots,the two spacecraft can easily be seen.

In the May 12 snapshot, Atlantis appears as a clearlyrecognizable shuttle in silhouette. Its nose is facing toward the limb of thesun and the shuttle?s tail, aft and starboard wingtip can be discerned.

The May 13 image is even more revealing. There, Legaultcaught both Atlantis and Hubble just before astronauts grappled the space telescope.The belly of Atlantis appears to be facing away from the higher Hubble, so itsfull outline reveals both wings, the nose and tail.

The school bus-sized Hubble is not as clear and appears asdark spot against the sun to the lower right of Atlantis. NASA?s space shuttlesare 122 feet (37 meters) long with a wingspan of about 78 feet (24 meters).Hubble is nearly 44 feet (13 meters) long and 14 feet (4 meters) in diameter atits widest point.

The sun is going through a quiet phase of its 11-year solarcycle that has left it nearly barren of sunspots. It is expected to hit amild peak in 2013.

Legault caught the transit of Atlantis and Hubble across thesun from Vero Beach, Fla. The shuttle launched toward Hubble on Monday from theKennedy Space Center in nearby Cape Canaveral, Fla., on an 11-day mission to upgradeHubble. The mission is aimed at extending the telescope?s life through 2014.