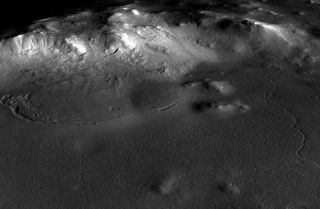 In this perspective view looking at the inside rim of Lyot Crater on Mars, a broad lobate debris apron (left) (thought to be a debris-covered glacier) is found amongst water-carved channels. The authors argue that these ice-rich units underwent melting in the relatively high-pressure environment provided by Lyot Crater, the deepest point in the northern hemisphere of Mars.
(Image: © NASA/JPL/GSFC/Malin Space Science Systems)

Mars is bone dry today. But long, long ago it was wetter and likely had rivers, most scientists agree.

A new study finds some serious valleys carved by rivers within the last billion years -- much sooner than most similar findings. That's good news for biologists, as water is a key to life as we know it, and the more recently there was liquid water on Mars, the greater the chances for life to have arisen and endured.

Jay Dickson of Brown University and his colleagues found valleys more than 800 feet wide (250 meters) and tens of miles (kilometers) long in new images from the Mars Reconnaissance Orbiter. The valleys look as though they were carved by running water.

"We believe that these new valleys were formed within the last billion years, which is quite recent when you view it in the geologic history of water on Mars," Dickson told SPACE.com.

The most serious rainfall and runoff that has been documented on Mars dates back to 3.5 billion years ago and older, when rivers and apparently huge floods scarred the planet.

Such ancient signs of water are interesting, but they don't bode so well for the possibility of life on the red planet. For now, there's no firm evidence of life, past or present, on Mars, but researchers continue the search with NASA planning robotic probes to head to likely places, where at least ice or perhaps underground water might remain.

Over the past decade, with more detailed imagery to work with and discoveries of ancient aquifers and possibly lakes by the twin Mars Rovers, the search for water on Mars has become more interesting.

Researchers have been finding evidence for water flowing more recently. In March, scientists said a system of gullies they studied suggest water flowed just 1.25 million years ago, at least in relatively small quantities.

Dickson and his colleagues found within a crater called Lyot some 20 winding valleys that they think were carved by "relatively large amounts of water," all in a surface dated to about 1 billion years ago -- meaning the rivers must have formed since then.

"Evidence for life might be better preserved in a younger terrain like what we have found, as opposed to the ancient terrain that was once wet, but has been significantly buried or eroded over 4 billion years," Dickson said.

The source of the runoff is thought to have been near-surface ice that melted. Dust-covered glaciers appear to still exist at the site, which is in the northern hemisphere of Mars.

"The interior of Lyot crater is an optimal micro-environment, since its low elevation leads to high surface pressure, and temperature conditions at its location in the northern mid-latitudes are sufficient for melting during periods of high-obliquity," the researchers write. "This micro-environment in Lyot apparently allowed melting of surface ice and the formation of the youngest fluvial valley systems of this scale yet observed on Mars."

The findings were published last month in the journal Geophysical Research Letters.