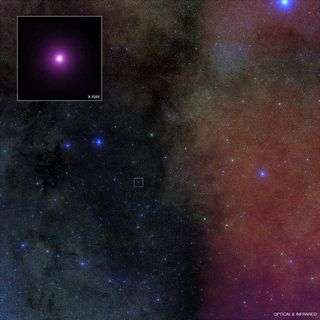 This optical and infrared image from the Digitized Sky Survey shows the crowded field around the micro-quasar GRS 1915+105 (GRS 1915 for short) located near the plane of our Galaxy. The inset shows a close-up of the Chandra image of GRS 1915, one of the brightest X-ray sources in the Milky Way galaxy.
(Image: © NASA/CXC/Harvard/J.Neilsen/Palomar DSS2)

Supermassive black holes that pack the heft of billionsof suns have the capacity to regulate their energy during a tug-of-war with ahot radiation wind that blows in from their debris disks.

Now 10 years worth of observations from the Chandra X-rayObservatory have uncovered the first clear evidence of this mysteriousphenomenon occurring in a small black hole just 14 times the mass of the sun.

"The supermassiveblack hole has thousands of stars nearby, a whole galaxy of matter to pusharound," said Joseph Nielson, an astrophysicist at the Harvard University."So it's more like supermassive black holes have more opportunity toself-regulate."

Black holes are so powerful that matter and even lightcannot get out once trapped. But around black holes, a flurry of activitycreates high-energy radiation — including radio waves and X-rays — that doesflow out into space. Sometimes it all gets pretty messy, and some of the energycan be channeled into focused jets that shoot out in both direction along theaxis of the black hole's rotation.

Chandra has kept an eye on a notoriously unpredictableblack hole that has 14 states of varying brightness, including a"heartbeat" state where periodic spikes in brightness resemble an EKGreading on a heart monitor.

Those unknown fluttering states have complicatedobservations of the GRS 1915+105 system for more than two decades, even thoughevery major ground and space observatory has taken a peek at one time oranother.

"These light curves are so bizarre that the blackhole has been described as 'pathological,'" Nielson told SPACE.com "Sothe fact that we can see past all that, to the fundamental physics of winds andjets, is very exciting."

Most black holes ordinarily have long periods of quietfollowed by occasional outbursts of jets and other activity, and so GRS 1915 isnot unusual in that respect. But the small and feisty black hole does stand outby having had active outbursts for 17 years.

On and off again

The black hole's energyjet continually fights a seesaw battle with the hot radiation wind, asrevealed in Chandra's X-ray observations. That wind flows in from the hot innerregions of the dusty, gaseous accretion disk surrounding the black hole.

"The outer disk actually absorbs some of thatenergy, and essentially begins to evaporate," Nielson said. "As itflows away from the disk, it absorbs even more of that radiation and itsmomentum, until the wind attains speeds of 1000 km/s [621 mi/s] or more."

Evaporation of the outer disk deprives the black hole jetof the mass that serves as its fuel, and eventually chokes it off. But the jetsstart up again. How the jets start up again remains a mystery.

Scientists know more about possible mechanisms drivingthe hot wind, which can include factors beyond the thermal driving or X-rayheating in the case of GRS 1915. Magnetic fields can also drive such windsaround small black holes, also known as micro-quasars.

"So our paper kind of raises a new mystery: why do somemicro-quasars produce magnetically-driven winds and others producethermally-driven winds?" Nielson noted. "Right now, we just don'tknow the answer."

In any case, the jet appearances can also differ greatlyin terms of how long they keep going.

"Maybe it's just for a few hours, but it could befor days or weeks," Nielson noted. "And some day, it will stopaltogether -- no jets, no winds, just a quiet accretion disk slowly feeding theblack hole."

But for now, GRS 1915 continues to provide usefulinformation that researchers can apply to understanding its super-massive blackhole cousins, which can defy observation for timescale reasons. An hour-long changein the small black hole would be equivalent to a timescale of 10,000 years in asuper-massive black hole, if the latter weighed a billion times the mass of thesun.

Much more Chandra data also remains for just this oneblack hole, and researchers have yet to analyze it all.

"It's sort of like going back to see what's on eachpuzzle piece," Nielson said. "Chandra is great for this sort ofthing, and we've got lots of data to pore over."