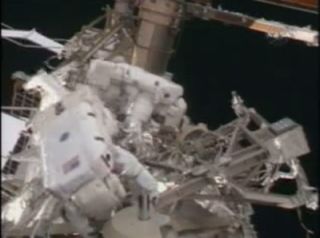 STS-119 spacewalkers Joseph Acaba and Richard Arnold II attempt to manhandle a stuck cargo carrier into position outside the ISS in a March 23, 2009 spacewalk. They were unsuccessful and lashed it down instead.
(Image: © NASA TV.)

Twoschoolteachers-turned-astronauts floated outside the International SpaceStation Monday to wrap up some unfinished work, but were stymied by a stuckcargo carrier on the orbiting lab.

Discoveryshuttle astronauts Joseph Acaba and Richard Arnold II pushed and pulled on thejammed carrier with all their strength, then attacked it with a hammer topush aside a pin that was incorrectly installed in a Saturday spacewalk.

But their effortswere to no avail, perplexing the spacewalkers. Engineers believe the catchsecuring the mechanism may be too stiff for spacewalkers to budge by hand.

?I justdon?t see anything in the way,? one of the astronauts said.

Thespacewalkers ultimately lasheddown the swing-out carrier, which is intended to hold future spare parts,using sturdy tethers to keep it in place until engineers on Earth can come upwith a fix. Mission Control canceled plans for the spacewalkers to swing out asecond spare parts platform because of the glitch.

Missionmanagers said the stuck carrier could remain tied down for years if necessary,but NASA wants to use both cargo platforms to store much-needed spare parts atthe station later this fall.

?Certainly,we can't fly that mission that's bringing up these critical spares for us untilwe get this problem resolved,? lead space station flight director KwatsiAlibaruho told reporters late Monday from the Johnson Space Center in Houston.Alibaruho said he wasn?t too disappointed with the stuck carrier because thereis time in the months ahead to fix it and Discovery?s spacewalkers achieved alltheir most critical goals.

Acabaand Arnold spent 6 1/2 hours working outside the space station withoutconcern of a piece of space junk that was predicted to buzz by the orbiting labduring their spacewalk. Their piece of mind came on Sunday, when astronautsused thrusters on Discovery to move the docked shuttle and space station clearof the 4-inch (10-cm) piece of a spent Chinese satellite rocket stage.

Monday?sspacewalk was the second for Acaba and Arnold, and the first time a pairof former schoolteachers has ventured out into space together. Bothastronauts joined NASA?s spaceflying ranks in 2004 as part of its cadre ofeducator astronauts and are making their first spaceflight.

?Take yourtime, enjoy it and do good work,? station commander Michael Fincke told theastronauts as they began their work at 11:37 a.m. EDT (1537 GMT).

In additionto tackling the stubborn cargo carrier, Acaba and Arnold moved an equipmentcart from the port side of the space station?s backbone-like main truss to thestarboard side. They also greased up the grappling end of the space station?srobotic arm and performed other maintenance work.

Monday?sspacewalk marked the 123rd dedicated to space station construction and thethird and last planned for Discovery?s 13-day mission to deliver a newcrewmember and the outpost?s lastpair of gleaming solar wings.

Acaba andArnold each performed an earlier spacewalk with astronaut Steven Swanson, whochoreographed Monday?s orbital work from inside Discovery. Acaba finishedtoday's work with 12 hours and 57 minutes during his two excursions, whileArnold wrapped up with 12 hours and 34 minutes of spacewalking time.

?Thanks forthe hard work,? Discovery commander Lee Archambault told the spacewalkers.?You?ve left the space station a much better place than it was 6 1/2 hoursago.?

Discoveryis due to undock Wednesday from the space station and head toward a plannedFlorida landing on Saturday.