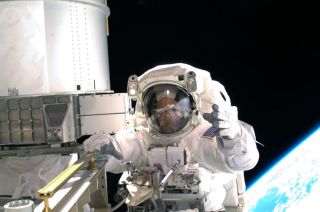 Two spacewalking astronauts are gearing up for round two against a jammed cargo platform outside the International Space Station that thwarted attempts to fold into place in an earlier excursion.

Discovery shuttle astronauts Joseph Acaba and Richard Arnold II, both schoolteachers-turned-spaceflyers, are due to float outside the space station on their mission's last spacewalk at 11:43 a.m. EDT (1543 GMT) to tie up the loose ends on the stuck platform among other tasks.

Acaba and fellow astronaut Steven Swanson left the portside cargo platform, which will serve as one of several spare parts depots for the station, in limbo — half-stowed, half-deployed — after it jammed during a Saturday spacewalk. The glitch delayed their orbital work and left some of their chores incomplete.

Kwatsi Alibaruho, lead space station flight director for Discovery's flight, said late Sunday that a restraint pin the spacewalkers accidentally installed in the wrong position in that spacewalk now does not appear to be the source of the trouble. A catch that must be released for the swing-out cargo platform to rotate into place appears to be stiffer than expected, and may just need a little more elbow grease to move.

"The fix for it may be as simple as simply pulling on in harder," Alibaruho told reporters late Sunday from NASA's Johnson Space Center in Houston. "But this is only a theory. We won't really know until we get the spacewalker at the site."

Alibaruho said spacewalkers are trained not to pull on any rotating mechanisms on the space station too hard to avoid damage. In a televised interview on Sunday, Swanson confirmed that he didn't tug too much on the device and is hopeful his crewmates will be able to force it into place.

"It looks like if I had just pulled hard on it, it would have come on down," Swanson said.

Arnold and Acaba, both making their second spacewalks, will also take pry bars, hammers and other tools to try and manhandle the platform into position. If it remains stuck fast, they'll string some sturdy tethers together to lash it down for the long-term, Alibaruho said.

Astronauts aboard the linked Discovery and space station used the shuttle's thrusters to move the orbiting laboratory on Sunday to dodge a piece of space junk that was expected to fly by the outpost about two hours into today's spacewalk. The debris, a small 4-inch (10-cm) piece of a spent Chinese satellite rocket motor, will now pose no threat to the space station or spacewalkers, NASA officials said.

The stuck cargo carrier is one of two spare parts platforms Acaba and Arnold plan to set up today. The other is on the space station's starboard side. They also plan to add a touch of grease to the end of the space station's 57-foot (17-meter) Canadarm2 robotic arm to make sure its grasping mechanism is in good health.

But the most vital task of today's spacewalk is the relocation of an equipment cart from one side of the space station's railcar-like Mobile Transporter to the other. The move will allow the railcar, which serves as base for the station's Canadian-built robotic arm and Dextre service robot, to reach a worksite on a later shuttle mission.

Acaba and Arnold planned to perform a host of other maintenance chores for today's spacewalk, but Mission Control reworked the excursion twice; first when NASA cut a day and a spacewalk from Discovery's flight due to launch delays, and then again after the cargo carrier problems on Saturday's spacewalk. The servicing tasks aren't critical and can be added to subsequent space station missions, Alibaruho said.

Today's spacewalk will be the third for Discovery's crew. Four spacewalks and an extra day were initially planned, but NASA trimmed the flight down to 13 days to complete it before the arrival of a Russian Soyuz spacecraft ferrying new crew to the space station.

Discovery is slated to undock from the space station Wednesday and land Saturday after delivering a new crewmember and the final set of U.S. solar wingsto the International Space Station.