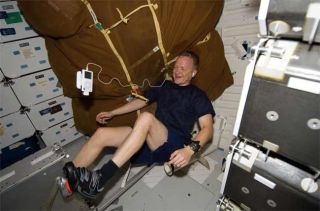 The space shuttle exercise bike, or cycle ergometer, on Discovery is similar to this one used by Endeavour shuttle pilot Eric Boe during a Nov. 2008 spaceflight.
(Image: © NASA.)

The annoying glitch has stymied repair efforts by theseven astronauts aboard Discovery, especially since the stationary bicycle canbe a challenge to set up in the shuttle?s cramped quarters. The shuttleis due to dock at the International Space Station later today at 5:13 p.m.EDT (2113 GMT).

?It?s a kind of cycle in the middeck that we all use tokeep in shape,? shuttle astronaut John Phillips said late Monday after tryingto get the space bike up and running. ?It?s quite a piece of work to get it puttogether.?

But after assembling the exercise bike, known in NASAparlance the ?cycle ergometer,? Phillipsand his crewmates found its pedals stuck fast.

?Basically the exercise bike is jammed,? shuttle flightdirector Paul Dye told reporters late Monday. ?We?re in the very early stagesof looking for a fix, but I?m pretty confident that we can fix that.?

Discovery is carrying a $298 million set of U.S. solararrays to the International Space Station to completethe outpost?s power grid. Three spacewalks and a one-astronaut crew swap atthe station are planned for the 13-day mission.

Dye said the bicycle glitch is a minor malfunction andthat Discovery has other exercise equipment to make sure the shuttle astronautscan keeptheir muscles strong in space.

NASA has long known that the muscles and bones ofastronauts in space weaken over time since they don?t have to work against thepull of Earth?s gravity when floating in weightlessness. Aboard the spacestation, astronauts have to work out about two hours every day to maintaintheir muscle strength during six-month spaceflights.

Aside from Discovery?s broken bike, shuttle astronautscan use a set of bungee-like resistance bands to work out, or use the station?sgym. They would have the pick of the station?s treadmill, exercise bike orresistance-based exercise gear, the latest delivered during a shuttle flightlast November.

?They?ve got different exercise equipment aboard thestation that we can look at possibly using,? Dye said. ?So even if thisergometer is jammed up, the folks will still be able to get some exercise whilethey?re on orbit. I?m not seeing this as a problem.?