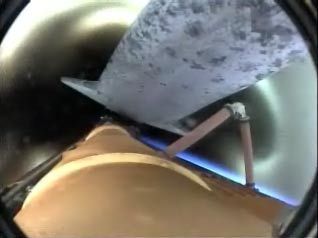 The space shuttle Discovery's heat shield can be seen in this view from its external tank as the 15-story fuel reservoir fell away from the shuttle as planned after a successful March 15, 2009 launch.
(Image: © NASA TV)

Astronautsaboard the space shuttle Discovery will inspect their spacecraft?s vital heat shieldfor damage today as they head toward the International Space Station.

One dayafter their spectacularevening launch, shuttle commander Lee Archambault and his seven-astronautcrew plan to use a sensor-laden inspection pole to scan Discovery?s wing edgesand nose for signs of new dings or divots.

?We didn?tsee anything at all in the first quick look,? NASA?s space operations chiefBill Gerstenmaier said of Discovery?s heat shield after the shuttle launchedinto space Sunday night. ?It looked pretty clean.?

The heatshield inspection is scheduled to begin at about 2:28 p.m. EDT (1828 GMT) andis the first of several in-flight surveys to search for damage to Discovery?sfragile heat-resistant tiles and panels from launch debris. It has been astandard practice since the 2003 loss of the shuttle Columbia during re-entrydue to heat shield damage.

Discoveryis headed to the International Space Station to deliver the outpost?s final setof U.S.-builtsolar arrays and a nearly 16-ton girder to complete its power grid andbackbone-like main truss. The shuttle is also ferrying Japaneseastronaut Koichi Wakata to the space station, where he will replace NASAastronaut Sandra Magnus as a member of the orbiting laboratory?s crew.

Threespacewalks are planned for the 13-day mission, which was delayed more than amonth, first by fuel valve concerns and later by a hydrogen gas leak last week.

A team ofengineers is poring over video of Discovery?s launch, but today?s inspection isthe first up-close view they will have to check shuttle?s heat shield health.

?Theinspection has become somewhat standard now,? said Discovery pilotDominic ?Tony? Antonelli before flight. ?We?ll grab this boom out ofthe shuttle?s payload bay. It?s got sensors on the end and we?ll use thosesensors to scan the leading edge and the nose are of the space shuttle to makesure we didn?t sustain any damage from ascent.?

?It?s verytedious work and you?re operating the inspection boom within very closeproximity of the orbiter for an extended period of time,? Archambault said,adding that he and other crewmates will share the job with Antonelli to easethe workload. ?The idea here is not to let anyone get complacent and keepeveryone focused on the job at hand.?

NASA haskept a close watch on shuttle heat shield integrity since the 2003 loss of theshuttle Columbia and its seven-astronaut crew during landing. A piece of foaminsulation from Columbia?s fuel tank broke off during launch and punched a holein the shuttle?s heat shield on its left wing edge, leading to the shuttle?sdestruction during re-entry 16 days later.

Shuttle analystswill study the images from today?s inspection and combine them with data fromtwo more in-flight surveys of Discovery?s heat shield scheduled during the 13-daymission. Astronauts aboard the International Space Station will snaphigh-resolution photos of Discovery?s tile-covered underbelly just before theshuttle docks on Tuesday in another survey. The last scan, performed afterundocking, will search for new dings etched by micrometeorites or other spacedebris.

NASA flightcontrollers told Discovery?s crew late Sunday that, so far, the spacecraftappears to be in fine shape after its evening liftoff.

"Thereare no observations indicating any concern for the vehicle or success of themission," astronaut George Zamka radioed up to the shuttle from MissionControl at NASA?s Johnson Space Center in Houston.