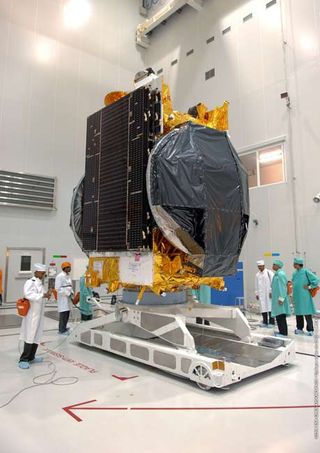 The W2M satellite is transported on a pallet that is easily controlled by a single launch team member during its movement through the S5 facility.
(Image: © Arianespace.)

Paris-basedEutelsat, in a Jan. 28 statement, confirmed that W2M, launchedDec. 20, suffered "a major anomaly affecting the satellite's powersubsystem" and would not fulfill its role of replacing Eutelsat's W2satellite at the company's 16 degrees east orbital position.

The W2satellite at that orbital slot continues to work well, but is nearly 11 yearsold. Eutelsat said it now will replace W2 with the much larger W3B satellitescheduled for launch in mid-2010.

Theimmediate problem for Eutelsat is that the company it had customers waiting touse the failed W2M satellite who cannot be placed on the agingcapacity-constrained W2 spacecraft. Once operational, the W2M would haveincreased Eutelsat's capacity at 16 degrees east to 30 transponders from thecurrent 27.

"Eutelsatis analyzing options using its existing in-orbit resources for meeting therequirements of clients who were expected to benefit from the increasedcapacity on W2M in comparison to W2," Eutelsat said in its statement.

Thesatellite is the latestto fail in space in recent weeks. On Jan. 15, the SES Luxemburg-ownedtelecommunications satellite Astra 5A failed after 12 years in Earth orbit. Anupdate released by NASA?s Orbital Debris Program Office this month reportedthat the Soviet-era Cosmos 1818 satellite, which launched in 1987 with its ownnuclear reactor, is breakingapart in orbit.

W2M is thefirst satellite to be launched as part of a joint venture formed in February2006, with the blessing of the French and Indian governments, of AstriumSatellites of Europe and Antrix, the commercial arm of the Indian SpaceResearch Organisation (ISRO).

The jointventure's ambition is to offer a low-cost alternative to satellites at thelower end of the power and weight range of commercial telecommunicationssatellites. It is a market niche that has been exploited most successfully inrecent years by Orbital Sciences Corp. of Dulles, Va.

AvantiChief Executive said Jan. 28 through a spokeswoman that the Avanti satellitedoes not use the components suspected of causing the failure on W2M.