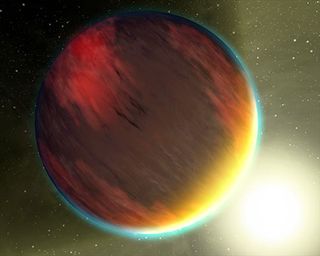 Scientistshave found clear evidence that water vapor exists in the atmospheres of giant,hot planets around other stars.

These biggaseous exoplanetshave masses similar to or greater than Jupiter's (which is about 317.8 timesthe mass of Earth). Many of them orbit precariously close to their parent stars,so they scorching hot.

A team ofastronomers used NASA's Spitzer Space Telescope to examine the spectrum of onesuch exoplanet, dubbed HD189733b, for a telltale signature of water vapor. Water is a keyrequirement for life as we know it, though HD 189733b (about 65 light-yearsfrom Earth) is too hot to be habitable.

Models ofthe atmospheres of these so called hot Jupiters have predicted that anabundance of watervapor should be present in the planets' atmospheres, but recentobservations failed to turn up any conclusive evidence of the molecule'spresence in HD 189733b's atmosphere, said astronomer Drake Deming of NASA'sGoddard Space Flight Center in Greenbelt, Md. Deming was not involved in thenew study.

An April2007 Astrophysical Journal study reportedto have found strong evidence for water vapor in the atmosphere of a worldcalled HD209458b using Hubble Space Telescope data. Deming said that this work"was good evidence" but that "a lot of people [in the scientificcommunity] had doubts ? they didn't think it was unequivocal."

The newwork measured the spectrum of the star/planet system before, during and after theplanet's regular disappearance behind the star, allowing the astronomers tosingle out the planet's spectrum. In it, they found "an unequivocalsignature of water vapor in the atmosphere of the brightest transitingexoplanet yet detected," Deming wrote in an accompanying editorial piecein Nature.

Nailingdown the technique for the detection of water is a key step toward findingEarth-like planets that have water and other key life-related molecules, Demingsaid.

Last month,another group of astronomers announced that they had detectedcarbon dioxide in HD 189733b's atmosphere; carbon dioxide is one of fourchemicals that life can generate, so it is also a key molecule that could beused in the search for life outside our own planet.