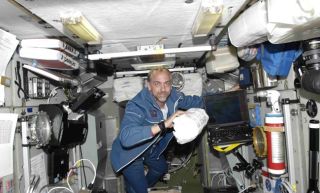 American spacetourist Richard Garriott is settling into life aboard the International SpaceStation and learning firsthand the lessons learned by his astronaut father.

Garriott,47, is a computergame pioneer and the son of former NASA astronaut Owen Garriott, a two-timespaceflyer who visited the U.S. space station Skylab and flew aboard theshuttle Columbia.

It waswhile aboard Columbia in 1983 that the elder Garriott used a ham radio to callRichard from space, and this week the son returnedthe favor.

?I?m veryexcited, Dad, to be able to ham contact with you,? Richard Garriott radioeddown to his father at Russia?s Mission Control Center outside Moscow this week.?I think it?s an interesting and historical moment.?

?We?rehaving a very nice time up here and having a beautiful view of Russia rightnow,? Garriott told his father.

Garriott isthe sixth paying visitor to the space station. He launched into orbit onOct. 12 aboard a Russian Soyuz TMA-13 spacecraft ferrying two professionalastronauts to the orbiting lab. Joining him on the trip were Expedition 18commander Michael Fincke, of NASA, and Russian flight engineer Yury Lonchakov.

Thespaceflying trio arrivedat the station on Tuesday, with Garriott due to return to Earth on Oct. 23with Volkov and Expedition 17 flight engineer Oleg Kononenko who are completingtheir own six-month mission. Fincke and Lonchakov are replacing the returningcosmonauts and joined NASA astronaut Greg Chamitoff already aboard.

?It was somuch fun watching him look at Earth for the first time in the Soyuz on our wayup,? Fincke said during a televised Thursday interview, adding that Garriottwas quick to learn the fundamentals of eating, drinking and bathing in space. ?He?spicked up all the basics really quickly and I think he?s really enjoying hismission so far.?

On Friday,Garriott held a radio webcast with children at Challenger Centers across thecountry to answer questions as part of his educational campaign. He has packedhis mission with a host of educational outreach events, science experiments andEarth observation targets.

Garriotttold students that he did not suffer from motion sickness during his firsttaste of weightlessness after reaching orbit, but the lack of gravity did causea fluid shift that gave him headaches at first.

?I?mfinally beginning to adjust and I?m only about five days into my 10 days inspace,? he said.

Garriottcompared floating in weightlessness to the sensation of scuba diving, onlywithout the water, and compared the spacious interior of the space station tothe main cabin of a 747 jumbo jet. He is the first space tourist to visit the stationsince the addition new rooms and laboratories over the last year.

?Here onboard, we?re kind of spread out,? Garriott told his father, adding that theextra room makes for comfortable sleeping arrangements.? Everybody kind oftakes a module to themselves. ?We have a pretty sizeable room, and of course inzero gravity it?s very, very comfortable as you know.?

In additionto enjoying his spaceflight, Garriott is hard at work with this many scienceexperiments and enjoying the camaraderie of his fellow astronauts.