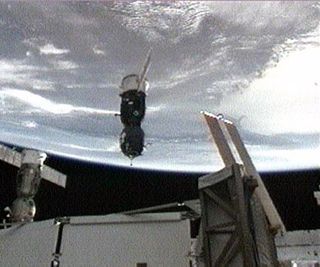 A RussianSoyuz spacecraft carrying American space tourist Richard Garriott and a newcrew for the International Space Station docked at orbiting laboratory earlyTuesday, where three astronauts were eagerly awaiting their arrival inside.

The SoyuzTMA-13 spacecraft dockedflawlessly at an Earth-facing port on the station?s Russian-built Zaryacontrol module at 4:26 a.m. EDT (0826 GMT) — a few minutes earlier than planned— as both spacecraft flew high above Kazakhstan, where the Soyuz launchedspaceward on Sunday.

?We havecapture!? said Expedition 18 flight engineer Yury Lonchakov, who commanded the Soyuzdocking under the call sign ?Titan? and launched alongside Garriott and newstation commander Michael Fincke.

Garriott ispaying$30 million for a 10-day trek to the space station under a deal betweenRussia?s Federal Space Agency (Roscosmos) and the Vienna, Va.-based firm SpaceAdventures. A computer video game pioneer, Garriott is the world?s sixth payingvisitor to the station and the son of former NASA astronaut Owen Garriott,making him the firstsecond-generation American spaceflyer.

?I can fly!?the younger Garriott told his father and friends at Russia?s Mission ControlCenter outside Moscow via video link after boarding the station. His familynicknamed him Peter Pan as he floated in weightlessness. ?I?m sure excited sofar.?

?Manythanks to Roscosmos,Energia andall of the contractors who made this flight possible,? the elder Garriott saidduring the briefing. ?We look forward to the completion in about 10 days.?

Aboard thestation, Expedition 17 commander Sergei Volkov and flight engineers OlegKononenko and Greg Chamitoff welcomed their first human visitors since June.Hatches between the two spacecraft opened at about 5:55 a.m. EDT (0955 GMT).

?We'rereally looking forward to seeing them up here,? Chamitoff told SPACE.comlast week, adding that the jump from three to six people aboard should be fun.?It?ll be definite change.?

Chamitoffjoined the Expedition 17 crew in June and will stay aboard with Fincke andLonchakov for the first stage of their six-month Expedition 18 spaceflight. Hiscurrent crewmates, Volkov and Kononenko, are wrapping up their own six-monthmission and will return to Earth on Oct. 23 with Garriott.

Tuesday?sdocking marked the beginning of a busy flight for both Garriott and stationastronauts.

Garriotthas packed his private spaceflight with a host of science experiments andeducational outreach projects. He has about 500 targets to photograph on Earth,many of them identical to those observed by his father — a two-time spaceflyer who flew to the U.S.space station Skylab and aboard a U.S. shuttle — during the Skylab 3 mission in1973. Owen Garriott is serving as his son?s chief scientist for thespaceflight.

The jointExpedition 18 and Expedition 17 crew, meanwhile, will begin an intense handoverperiod as Volkov and Kononenko prepare for their trip home.

Finke and Lonchakovexpect to perform one spacewalk during their mission and host two visitingspace shuttle missions that will bring new equipment vital to prepare the spacestation for larger, six-person crews.

?I reallywas looking forward to getting a chance to go back,? said Fincke, who is makinghis second station flight since 2004, in a NASA interview before launch. ?Thistime, it?s much bigger than when I left it and we?ll leave it in even bettershape, ready for the next crew.?

Fincke?swife Renita and three children — Chandra, age 7; Tarali, age 4; and 7-month-oldSurya — also sent their love to the veteran spaceflyer from Russia?s MissionControl. His parents Edward and Alma were also on hand.

?I?m gladto be here, thanks for letting me come to space station. I?m feeling great,? asmiling Fincke told his wife, children and parents. ?I?m up here with a bunchof handsome guys, that?s for sure.?