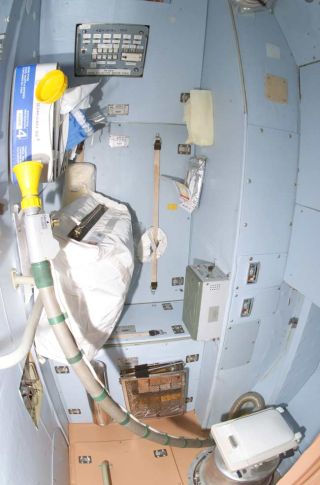 A view of the toilet compartment in the Zvezda Service Module of the International Space Station (ISS).
(Image: © NASA.)

The masterbathroom for three astronauts aboard the International Space Station is on the fritzagain just days before a trio of new spaceflyers are due to launch toward theorbiting lab, NASA officials said Friday.

A temporarytelemetry glitch also sent the space station into a so-called survival mode earlierthis morning, changing the outpost?s attitude and leading to system power downsfor several hours. That issue was quickly tracked to an electronics box aboardthe station, but the balky space toilet in the Russian Zvezda service modulecontinues to plague astronauts and flight controllers.

?It failedlate yesterday,? NASA spokesperson John Ira Petty said of the Russian-builtspace commode in televised commentary from Mission Control in Houston. ?Russian specialists aretroubleshooting. The problem appears to be a [gas] separator issue.?

It?s afamiliar problem for space station commander Sergei Volkov and flightengineers Oleg Kononenko and Greg Chamitoff. A similar glitch knocked the spacetoilet out of commission in June, leading Russian engineers to rush a spare gas-liquidseparator assembly pump to NASA?s Kennedy Space Center spaceport in Florida, whereit was packed aboard the shuttle Discovery and launched to the orbiting laboratory.

The spacestation?s Russian toilet uses fans and airflow in place of gravity to collectsolid and liquid waste for disposal. The gas-liquid separator is part of theliquid waste system. It weighs about 35 pounds (16 kg) and is about 1.5 feet (about half ameter) long and 8 inches (20 cm) wide and tall.

It is unclearwhether there is a spare that could be added to Sunday?s planned Soyuz TMA-13launch, which will ferry spacetourist Richard Garriott and two new station astronauts to the orbitinglaboratory for a crew swap.

?In themeantime, the crew has been instructed to use the toilet in the Soyuz [TMA-12]spacecraft,? Petty said.

NASA has paid$19 million for a secondRussian-built space toilet, which will be delivered alongside other life support,exercise equipment and sleeping quarters during a November shuttle mission. Havingtwo working main toilets is vital for the space station, which is expected todouble its crew size to six astronauts next year.

Meanwhile,Petty said flight engineers in Russian and NASA?s Johnson Space Center Mission Controlin Houston were still working at recovering systems from this morning?stelemetry glitch. While the malfunction was swiftly tracked to an electronicsbox, backing out of the power down process is a lengthy affair, he added.

?The backout so far has been accomplished without any damage or long term impacts tostation systems,? Petty said.