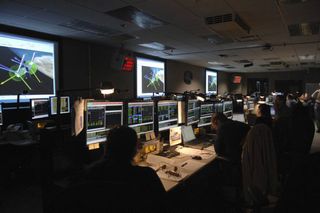 Engineers look on in the the Hubble Space Telescope Operations Control Center at NASA's Goddard Space Flight Center as commands are sent to the Science Instrument Control and Data Handling system.
(Image: © NASA)

The new issues cropped up on Thursday while engineers were attempting to switch Hubble to a backup data relay channel and restore the telescope's ability to beam images and data back to Earth following a hardware failure last month.

"We think the soonest that we would be back doing full science would be sometime late next week," said Art Whipple, chief of NASA's Hubble systems management office at Goddard Space Flight Center in Greenbelt, Md., in a Friday teleconference.

The 18-year-old Hubble's main science operations have been hobbled since Sept. 27, when a data relay channel failed in the observatory's Science Instrument Control and Data Handling system. The channel, known as the Side A science data formatter, had been working properly since the telescope launched in April 1990.

Hubble has a backup channel, Side B, and engineers began the complicated activation of that unit early Wednesday. The tricky switch also required the activation of five other backup systems that had also been in hibernation since Hubble's 1990 launch.

Engineers at NASA's Hubble operations center at Goddard worked around the clock to make the transition, which included uploading hundreds of computer commands to reroute systems.

But during calibration checks on Thursday, a component of Hubble's main camera returned a lower than normal voltage. The second glitch revolved around a communications drop out between Hubble's main computer and one that governs its science instruments, which sent the telescope back into a protective "safe mode."

"We remain optimistic at this time for recovering full science operations," said Jon Morse, director of astrophysics with NASA's Science Directorate. "But even the best laid plans can encounter some unanticipated difficulties."

Whipple said that it's not currently clear whether the two glitches are related or separate, or if they are indications of an intermittent problem or outright hardware failure.

"We're in the early stage of going through a mountain of data that has been downloaded over the last 24 hours," Whipple said. "Nothing's been 100 percent ruled out — but we're fairly certain that it's not a configuration or a commanding error."

Engineers planned to put Hubble into a safe mode configuration during the two-day switch to Side B, and then bring the telescope's systems online once the transfer was complete. It was only the sixth time in Hubble's 18-year history that the telescope was placed in the safe mode.

But Whipple stressed that Hubble engineers were not unprepared for Thursday's glitches, and have several options to work through or around the malfunctions. They could even reactivate Hubble using a hybrid approach that patches the telescope's main science instruments through parts of both the Side A and Side B channels, he added.

"It was not unexpected that there might be issues," Whipple said, adding that Hubble engineers are fully confident they can revive the telescope before next year's planned shuttle mission to overhaul the observatory. "We expect that we will work through it and we will be back up and doing science before the servicing mission."

Hubble's data relay channel woes forced NASA to delay the planned Oct. 14 launch of the servicing mission aboard the shuttle Atlantis until next February or later, with engineers hoping to include spare parts to restore the Side A data relay channel.

Without a functioning data relay, the otherwise-healthy Hubble can continue its astrometry observations to track the positions and movements of distant cosmic objects. Those observations use Hubble's fine guidance sensors, which can beam signals to Earth independently of the Side A or B channels.

The last time Hubble's main science instruments were offline for an extended amount of time was in late 1999. Gyroscope problems then put the space telescope out of action for about six weeks, Whipple said.

But reactivating Hubble correctly, not swiftly, is vital, and engineering teams will likely not continue their round-the-clock schedule this weekend in order to get some rest and stay fresh, he added.

"This is a marathon, it's not a sprint," Whipple said. "It's more important that we do things right rather than fast."