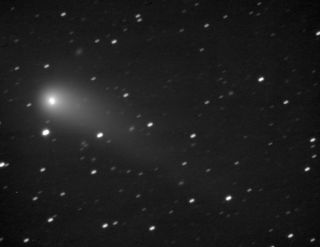 A comet discovered earlier this year has now moved close enough to be visible without binoculars or telescopes by experienced observers under dark skies. It is expected to put on a modest show this month and into January.

People with dark rural skies and a good map should be able to find it on Moon-free nights now into January.

Backyard astronomers have been watching Machholz for months through telescopes. It was spotted by naked-eye observers for the first time about three weeks ago from the Southern Hemisphere, said Donald Machholz, who discovered the frozen chunk of rock and ice in August.

"I saw it last night for the first time with the naked eye," Machholz told SPACE.com Friday.

Comets are made of rocky material and icy mixtures of water and various other chemicals. As a comet approaches the Sun, the surface is heated and essentially boils off. Scientists call the process sublimation. The gas and dust creates a head, also called a coma, and sometimes a tail. Sunlight reflects off the material, making some comets visible from Earth.

Comet Machholz, officially named c/2004 Q2, is not expected to produce the sort of spectacular display put on by comet Hale-Bopp in 1997 or the periodically stunning Halley's comet.

Astronomers cannot say exactly how bright Machholz will get, because it is notoriously difficult to predict the behavior of comets making their first observed close trip around the Sun. Scientists don't fully understand the composition of comets, nor their variety, so they don't know how much stuff will sublimate nor how fast.

Machholz is expected to reach magnitude 4.0, based on an early estimate. On this astronomers' scale, smaller numbers represent brighter objects. The dimmest things visible under perfectly dark skies are around magnitude 6.5. The brightest star, Sirius, is magnitude minus 1.42.

Recent observations suggest Machholz will do at least as well as first predicted.

The Andromeda Galaxy is the furthest object visible to the unaided human eye under dark skies. It is a magnitude 3.4 object.

If the comet were to become roughly magnitude 3.0, it would still appear common among the sea of stars available to dark-sky observers. City and suburban dwellers would likely not find it without optical aid. In either case, binoculars or a small telescope might reveal the comet as more of a fuzzy patch, and if it develops a significant tail, that could be visible too.

Machholz, who has found nine other comets, suggests looking for his latest discovery when the Moon is out of the picture, such as around Dec. 11 when it will be at its New phase.

"The comet can still be seen when the Moon is out, but it will be difficult," he said by email. "Use binoculars or a wide-field (low power) telescope, and/or get to a dark site."

The comet is low on the horizon now, where the atmosphere makes for poor viewing. By early January, the comet will be much higher in the sky, improving viewing conditions.