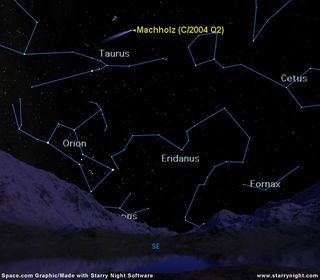 Donald Machholz of Colfax, California, an optician who has been interested in astronomy since age eight, discovered nine comets from 1978 through 1994. He has since spent 1,457 hours scanning the skies for other comets, without any luck.

But his luck changed on the morning of Aug. 27, when he swept up his tenth comet.

It could become the fourth comet this year to excite backyard astronomers.

After a treat of three comets in the spring -- NEAT, LINEAR and Bradfield -- the first indications suggest Machholz's discovery will become easily visible in binoculars and small telescopes this winter and possibly to the unaided eye.

Comet brightness is notoriously difficult to predict, however, and it is too early to know whether this one will put on a memorable show.

When Machholz first picked up the comet - officially designated c/2004 Q2 - it was a fuzzy 11th-magnitude object in the constellation Eridanus and drifting slowly southeast in the direction of the constellation Lepus. On this astronomer's scale, larger numbers represent dimmer objects. Under the darkest skies, the typical observer can spot with the unaided eye objects of magnitude 6.5 and brighter.

Machholz spotted the comet through the 30X eyepiece of his 6-inch f/8 Criterion Dynascope Newtonian reflector, a vintage telescope that was a mainstay among amateur astronomers during the 1960s and 70s. Machholz had purchased his back in 1968.

From 38 observations over a four-day period, Brian Marsden at the Minor Planet Center in Cambridge, Mass. calculated an orbit for the new Comet Machholz. It is on its way toward the vicinity of the Earth and the Sun, and during October and November, its projected path will appear to describe a small loop taking it into the constellations Lepus, Columba and Caelum. Since it will still be relatively far from both the Sun and Earth, its apparent motion -- in relation to the stars from night to night -- will be quite slow.

At the beginning of December it will return to Eridanus, at which point the comet's motion across the sky will abruptly turn northward and rapidly increase, making the comet well placed for Northern Hemisphere observers by the last week of December.

According to Marsden's calculations, Comet Machholz could become as bright as fourth magnitude. It could possibly hover around at this brightness for about a month beginning right after Christmas. During this interval, the comet will move north of the celestial equator, tracking from southern Taurus on up into the constellation Perseus.

Fourth magnitude means that the comet should at be at least dimly visible to the naked eye in dark skies, though better seen in binoculars or telescopes. Urban skywatchers would not be able to see it without optical aids.

That kind of brightness would still make Machholz a very fine comet from the viewpoint of an amateur astronomer, especially in early January, when it will be approaching the Earth and will be well placed for viewing -- high in a dark sky. Given current information, it doesn't appear that this comet will become the kind of spectacle that Comet Hale-Bopp was in grabbing the public's attention.

And although the script is still being written concerning Machholz's upcoming performance, be advised that comets are notoriously bad actors. As an example, the first brightness estimates for Comet NEAT had it possibly becoming as bright as first magnitude -- easily visible even from cities. Ultimately it became only as bright as third magnitude at best.

Comet Machholz could brighten up and give us a real surprise. Comets have surprised on the bright side before. Yet few celestial events have greater false-alarm potential than these interplanetary vagabonds.

The comet is predicted to come closest to Earth on the night of Jan. 5-6, 2005, when it will be just 32 million miles (51 million kilometers) away. On the evening of Jan. 7, it will conveniently pass just a couple of degrees to the west of the famous Pleiades star cluster.

Comet Machholz will reach perihelion -- its point closest to the Sun -- on Jan. 24, when it will be just under 112 million miles (179 million kilometers) from that blazing furnace. The comet will be more or less opposite the Sun all during this "flyby", and thus should be easily visible in a dark sky from Earth.