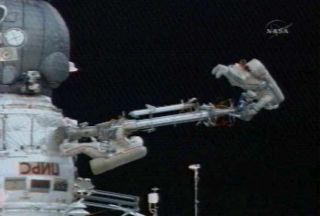 Cosmonauts successfully removed an explosivebolt from a Russian Soyuz spacecraft during a Thursday spacewalk.

The removal of the explosive bolt representspart of a continuing Russian investigation into what caused the two previous Soyuzmissions to gooff-course and undergo ballistic reentries during their return to Earth.

Ten of the pyro bolts typically fire toseparate the Soyuz instrument module from the return module. That allows the Soyuzto point its heat shield downward to protect itself from the heat of reentry.

However, a mysteriously delayed separation ofthe modules forced the latest three-person Soyuz crew to endure a steepballistic reentry and gravitational forces reaching up to 10 times those onEarth. South Korea's first spaceflight participant, So-yeon Yi, detailedthe experience as ?scary? and was brieflyhospitalized afterward for neck and back pain.

Russian engineers want to check the pyrobolts for signs of environmental damage from electromagnetic or plasma forcesaround the space station and Soyuz spacecraft. NASA officials are alsointerested in the results of the investigation, because the Soyuz will providethe only access to the space station for a time after the spaceshuttle retires.

The two cosmonauts opened the hatch of thePirs airlock on the ISS at 2:48 p.m., officially beginning a roughly six-hourspacewalk.

Delays mounted at the start of the spacewalk,as the cosmonauts struggled to set up the Strela crane meant to carry Kononenkoto the work site.

?Strange, I had it,? Kononenko said whilestruggling to get his feet planted in the crane?s foot restraint. Russianmission control finally told the cosmonaut to tether himself to the crane.

The cosmonauts kept their humor, and evenremembered their third space station crewmate. U.S. astronaut Greg Chamitoff satinside the Soyuz during the entire spacewalk, so that he would be able toescape from it in the unlikely case of an emergency in which the airlock usedfor the spacewalk could not be re-pressurized.

?We can probably go ahead and scare Greg alittle through the window,? one cosmonaut said.

Kononenko reached the Soyuz first on thecrane and did not spot any ?expensive or criminal? damage to the spacecraft. Heand Volkov then took photos and placed covers on the Soyuz thrusters to preparefor their main operation. Kononenko then used a serrated knife to cut away insulationfrom the Soyuz spacecraft work site.

?We feel sorry for the vehicle.? Kononenkosaid in a stab at humor.

?We?re not damaging it, we?re healing it,?fellow spacewalker Volkov replied, but maintained a serious tone as he warnedhis crewmate to be careful with the knife.

The spacewalkers applied a set of plierscalled ?dino cutters? to ground static electricity in the area, and used othertools and even sheer force to remove an electrical locking ring, electricalconnector and wire tie that held the pyro bolt in place.

Russian mission controllers asked Volkov totake Kononenko?s place at one point, and repeatedly requested the cosmonauts torest and not tire themselves.

The crowning moment of the spacewalk arrived as Volkovused a socket wrench to unscrew the explosive pyro bolt from its housing.Kononenkostood by with the blast-proof case to secure the bolt, which has the powerroughly equivalent to a large M-80 rocket.

Russian mission controllers asked the cosmonauts to countthe number of turns with the socket wrench. An estimated 10 turns was needed toremove the bolt.

?After five, please be very careful,? said a Russianmission controller.

The cosmonauts paused at eight turns as they conferredtheir plan of action, and then cooperated to loosen the bolt and put it intoits secure case.

?Good! Thank God, it is in,? exclaimed one cosmonaut. Themain objective was completed at 3 hours and 58 minutes into the spacewalk.

Russian mission control dictated a five minute break?without any motions, without moving,? before allowing the cosmonauts tocomplete the spacewalk by placing a protective thermal blanket over the areawhere insulation was cut away.

Mission controllers also decided to delay thesecondary goal of the mission to install a docking target on the Zvezda servicemodule. That is instead planned to occur during the second spacewalk scheduledfor July 15, when the cosmonauts are slated to outfit the Russian segmentexterior as well as install and remove science experiments.