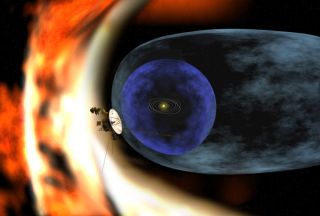 Artist's rendering depicts the Voyager 2 spacecraft as it studies the outer limits of the heliosphere - a magnetic 'bubble' around the Solar System that is created by the solar wind. Scientists observed the magnetic bubble is not spherical, but pressed inward in the southern hemisphere.
(Image: © NASA/JPL)

Both Voyager 1 and Voyager 2 continue to send data to Earth more than 30 years after they first launched. During the 1990s, Voyager 1 became the farthest manmade object in space.

?The solar wind is blowing outward trying to inflate this bubble, and the pressure from interstellar wind is coming in,? said Edward Stone, physicist and Voyager project scientist at Caltech in Pasadena, Calif. He and other researchers published a series of studies in the journal Nature this week that detail the Voyager findings.

This way and that

The reason for that asymmetrical shape rests with an interstellar magnetic field that puts more pressure on the southern region of the solar system — something that may change over 100,000 years as that magnetic field experiences turbulence, Stone said.

Comparing the Voyager 1 crossing in December 2004 with the Voyager 2 crossing in August 2007 allowed scientists to confirm that the second sibling actually crossed the termination shock and passed into the heliosheath, an outer layer of the heliosphere. But Voyager 2 also carries more working instruments that show the termination shock in full detail.

Voyager 1?s plasma detector failed after it passed Saturn, so Voyager 2 provided the first glimpse of what happens to the solar wind?s energy as it slams into interstellar space. The solar wind travels outwards from the sun at supersonic speeds, and at temperatures near 17,540 degrees Fahrenheit (10,000 degrees Kelvin).

Neutral atoms that flowed in from outside the solar system became energized upon entering the heliosheath layer, and then ended up stealing 80 percent of the energy from the solar wind. Researchers have yet to puzzle out the significance of this.

An added mystery remains as to why the solar wind slows down early, as though anticipating running headlong into the termination shock. Researchers have begun looking into whether the solar wind somehow sheds energy ahead of time.

Even as researchers continue parsing the Voyager findings, both spacecraft plow onward toward deep space — and beyond all expectations of their original mission.

?My guess is five to seven years to reach interstellar space,? Stone said. ?There?s a very good chance that Voyager I will send the first data back from there.?