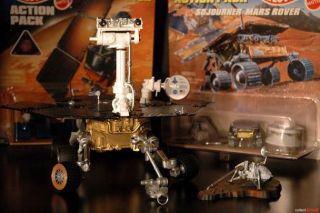 Toy versions of Mars spacecraft, sans Phoenix that landed on the red planet on Sunday, May 25.
(Image: © collectSPACE.com)

In onescene during the 1995 feature film "Apollo 13," Tom Hanks, asastronaut James Lovell, demonstrates to his son how the Apollo lunar moduleflies to a landing on the Moon using a toy model of the lander.

"And Itake the controls, and I steer it around, and I fly it down, adjusting it here,the attitude there, pitch, roll ... for a nice, soft landing on the moon,"explains Lovell as he simulates the movement of the spacecraft with his hand.

NASA'sPhoenix spacecraft, which safely touched down within Mars' northern arcticregion on Sunday, followed a similar, though unmanned, autonomous approach tothe surface, becoming the first lander to descend onto the red planet usingthrusters since twin Viking missions in 1976.

Unlike theApollo module or earlier Mars landers however, there are no toy or modelversions of Phoenix available to parents, teachers, children or collectors torecreate the spacecraft's dramatic entry, descent and landing that wasdescribed by the mission's officials as "seven minutes of terror."

Phoenix, as only the sixth lander to safelytouch down on the surface, is the only one that hasn't been packaged for saleas a toy or model kit.

The yearbefore NASA launched its first Mars rover, the Sojourner, on-board the MarsPathfinder mission in 1996, Mattel, Inc. came to the Jet Propulsion Laboratory(JPL) to discuss creating a miniature model of the six-wheeled Martian terrainvehicle.

"Whocould help but become intrigued by the Mars Pathfinder mission ... after seeingthis intricately accurate mini-version of the mission's mini-rover?" askeda JPL official in a media statement issued at the time.

When thespacecraft touched down on the red planet on July 4, 1997, the "Hot WheelsJPL Sojourner Mars Rover Action Pack" landed on store shelves.

Mattel hada difficult time keeping up with demand. The set, which included the rover, itslander and the aeroshell that protected it during its entryinto Mars' atmosphere, went through several package redesigns and was evenoffered by the toy company as a limited edition, plated in 24-karat gold.

It wastherefore of little surprise that Mattel would choose to follow up theirsuccess with another set of toys for the next series of Mars spacecraft.Shipped to coincide with the arrival of NASA's Mars Polar Lander in 1999, the "HotWheels JPL Returns to Mars! Action Pack"again included three miniature vehicles, including NASA's Mars Climate Orbiterand the Deep Space 2 microprobes that would be deployed during the polarlander's descent.

Once again,the set gained popularity, though for different reasons than Mattel had hoped.Unfortunately for NASA and Mattel, all three spacecraft failed. Miscalculationsled to Climate Orbiter being destroyed. Polar Lander and its companionmicroprobes ceased to respond after starting their descent into the atmosphere.

Rumors of arecall fueled collectors' interest in the packs, which quickly appeared forsale on sites such as eBay, sometimes retitled as NASA's "Crash Pack."Even so, the sets largely ended up in clearance bins months after theunsuccessful events on Mars.

The lossesemphasized the risks involved with launching spacecraft to Mars, not to mentiontying products to their success. In the history of Mars exploration, more than40 missions have been launched with just under half failing.

The oddsmay have been too daunting for Mattel, which to date has yet to show interestin producing a new Mars lander toy, but their departure opened the door toothers.

Forcollectors and Mars enthusiasts, Code 3 Collectibles offered a one-tenth scalemodel of the rovers, complete with moving wheels and instruments as well as aMartian surface base. The limited-edition, $150 replica sold out.

So what wasit about Phoenix that kept toy companies at bay? Could it be a sign thatinterest is waning in the Mars spacecraft?

"Maybe,"said Chris Lewicki, the lander's flight systems engineer, in an interview withcollectSPACE last week. Lewicki felt there might be other factors at play,as well.

"Phoenix doesn't have wheels, and isn't coming out of the high drama of two Mars missionfailures as [the rovers] did," he said.

Were acompany interested in producing a toy or model, they would need to seek alicense from the California Institute of Technology, which manages JPL. Unlikeother NASA missions which designs are public domain, JPL maintains control overthe use of the vehicles it manages for NASA as a result of its public-privatepartnership with the government space agency.

A JPLspokesperson reached by collectSPACE said that at this time they were unawareof any requests to use the Phoenix for a toy or model. Lewicki would have likedto see otherwise.

"Iwould like to see that realistic replicas are available for all spacecraft(including orbiters), but there often isn't much demand. The most realisticmodels are restricted to custom-built models used by JPL and NASA, which can'tbe affordably mass-produced," he explained.