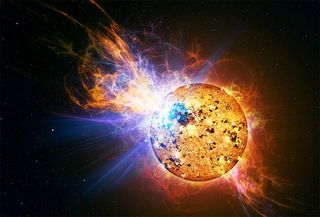 A tiny starrecently unleashed what is considered the brightest burst of light ever seen inthe universe from a normal star, astronomers announced today.

Shiningwith only 1 percent of the sun's light and boasting just a third of the sun'smass, this run-of-the-mill star previously was nothing to write home about. OnApril 25, the red dwarf star, known as EV Lacertae, unleashed a mega-flare,packing the power of thousands of solarflares. Since the star is located 16 light-years away, inreality, the flare actually occurred 16 years ago.

Theflare was first seen by the Russian-built Konus instrument on NASA?s Windsatellite in the early morning hours of April 25. Two minutes later, Swift?sX-ray Telescope caught the flare. The star remained bright in X-rays for eighthours before settling back to normal.

It wouldhave been visible to the naked eye if the star had been easily observable inthe night sky at the time. EV Lacertae?s constellation, Lacerta, is visible inthe spring for only a few hours each night in the Northern Hemisphere.

The star,with an estimated age of a few hundred million years, has a history of flares,though none as bright as the most recent one.

Osten saysgiant flares like this one are analogous to solar flares, but stellar flaresare hundreds and sometimes thousands of times more powerful. The extra powerlikely comes from the stars' magnetic fields. For instance, EV Lacertae rotatesonce every four days, much faster than the sun's four-week rotation. The star'squick rotation generates strong localized magnetic fields, about 100 times aspowerful as the sun's.

"Theseflares are ultimately related to the twisting and tangling of magnetic fieldsthat are poking out of the surface of the star, and stars like it," Ostentold SPACE.com.

And like thesun, EV Lacertae is covered in spots, which move around during outbursts.

Since EVLacertae is 15 times younger than the sun, it provides a window into our solar system?s early history,scientists say. Younger stars rotate faster and generate more powerful flares.So in its first billion years, the sun must have let loose millions ofenergetic flares that would have profoundly affected Earth and the otherplanets.