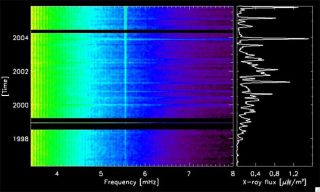 Global oscillations of sound waves in the sun are correlated with solar flares (represented by the solar X-ray flux in the right panel). The color-coding represents the strength of the oscillations. Credits: SOHO/VIRGO (ESA & NASA).

Mightyeruptions on the sun trigger bursts of sound waves that ripple across the fieryball of gas, astronomers say.

The finding,which will be published in the May 1 issue of the Astrophysical JournalLetters, comes from data collected with the Solar and HeliosphericObservatory (SOHO), a joint venture between NASA and ESA.

Astronomershave known that sound waves constantly trek toward the sun's interior,producing a background "ringing" of sorts. As they move through thesun's plasma, the sound waves take on a pulsing pattern of five minutes, andhence are called five-minute oscillations. They are also called starquakes.

Until now,scientists thought the oscillations were caused by churning gas near theinterior of the sun. And the churning gas does play a role, but there's more.

These globaloscillations can be thought of as the sound you would get from a bell sittingin the middle of the desert that is constantly tapped by random sand grains.

NowChristoffer Karoff and Hans Kjeldsen, both at the University of Aarhus,Denmark, find that every once in a while somebody bangs a hammer on the bell ? bing? causing a stint of intense soundwaves. That hammer, they found, comes from powerful solar flares.

"Thesignal we saw was like someone occasionally walking up to the bell and strikingit," Karoff said, "which told us that there was something missingfrom our understanding of how the sun works."

Theydiscovered a strong correlation between an increase in the number of solar flares and a bump in thestrength of the five-minute oscillations.

"Thislarge flare on the sun, this disturbance, shakes the sun and then it keepsvibrating for some time with these global oscillations," Fleck told SPACE.com.

A similarphenomenon occurs on Earth in the aftermath of large earthquakes. For example,after the 2004 Sumatra-Andaman Earthquake, the whole Earth rang with seismicwaves for several weeks.

Now theresearchers hope to figure out more about exactly how the flares cause theoscillations.