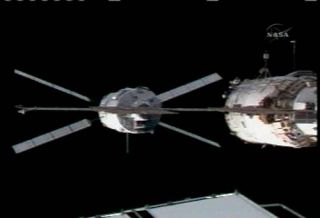 TheEuropean Space Agency (ESA) approved plans to dock the massive automatedcargo ship Jules Verne at the station on Thursday at 10:41 a.m. EDT (1441GMT). The first of Europe?s new fleet of Automated Transfer Vehicles (ATVs),the 21-ton spacecraft has already made two approaches to the spacestation - on Saturday and Monday, respectively - flying within about 36 feet(11 meters) at its closest approach.

"We have proven that Jules Verne's systems are safe,reliable and ready to dock to the station,? said John Ellwood, ESA's ATV projectmanager, in a Wednesday statement.

Named after the famed 19th centuryscience fiction writer, the Jules Verne ATV is a cylindrical spacecraftabout the size of a London double-decker bus. It is large enough to carry threetimes the cargo as Russia?s unmanned Progress spacecraft and is powered by foursolar panels that jut out at diagonal angles, giving the space freighter the look ofa fatX-wing fighter from ?Star Wars.?

Jules Verne launchedtoward the ISS on March 8 (ET) atop a modified Ariane 5 rocket to begin analmost four-week shakedown cruise. It is the first of at least five, andpossibly a total of seven, ATVs to haul fresh supplies to astronauts aboard thespace station.

The 32-foot (10-meter) long Jules Verne is about 15 feet (4.5meters) wide and took up a parking orbit while the crew of NASA?s space shuttleEndeavour delivered a new Japanese room and Canadian robot to the ISS last month.

The ESA has spent about 1.3 billion Euros ($1.9 billion) todevelop, build and launch the Jules Verne ATV. Flight controllers at adedicated ATV Control Center in Toulouse, France, are watching over the newspacecraft.

Unlike Russia?s Soyuz and Progress vehicles, which can beflown manually or by remote control if their autonomous systems fail, ESA?s ATVcargo ships are not designed to be guided in by astronauts. Instead, space stationcommander Peggy Whitson and flight engineer Yuri Malenchenko have a red button that they can push to send Jules Verne back to a safedistance if it strays from its proper docking course.

But the spacecraft and its novel video-based docking system,which uses lasers to determine its position from the ISS, have performed asexpected during tests.

On March 29, Jules Verne flew within about 2 miles (3.5 km)of the station before backing away as directed. During Monday?s test, the cargoship parked itself 36 feet (11 meters) from the aft of the station?sRussian-built Zvezda service module, where it is set to dock on Thursday,before Whitson and Malenchenko successfully tested their emergency escapecommand to send the spacecraft away.

?Everyone has worked very hard to get to this point, and we havealso proven that the team on the ground is fully ready for tomorrow's firstattempt,? Ellwood said.