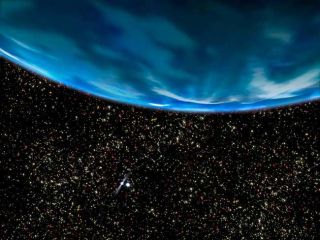 An artist's conception of an Earth-like planet around another star.
(Image: © NASA and H. Richer (U. British Columbia))

Earth may have a twin orbiting one of our nearest stellar neighbors, a new study suggests.

University of California, Santa Cruz graduate student Javiera Guedes used computer simulations of planet formation to show that terrestrial planets are likely to have formed around one of the stars in the Alpha Centauri star system, our closest stellar neighbors.

Guedes' model showed planets forming around the star Alpha Centauri B (its sister star, Proxima Centauri, is actually our nearest neighbor) in what is called the "habitable zone," or the region around a star where liquid water can exist on a planet's surface.

The model also showed that if such planets do in fact exist, we should be able to see them with a dedicated telescope.

"If they exist, we can observe them," Guedes said.

Guedes' study has been accepted for publication in the Astrophysical Journal.

Astronomers have for some time pinned the Alpha Centauri system as one that was likely to form planets, said study co-author Gregory Laughlin, a UCSC professor.

"I think that there's been a good line of evidence over the past decade or so," Laughlin told SPACE.com.

Several factors mark the system, particularly Alpha Centauri B as friendly to planet formation, Laughlin said. The metallicity of Alpha Centauri B (or how much of its matter is made up of elements heavier than hydrogen and helium) is higher than our Sun's, so there would be plenty of heavier-mass material for planets to form from, he said.

Also, because the planet iwould form in a triple star system, the processes that form large Jupiter-mass gas giants, which account for most of the extrasolar planets found so far, would be suppressed. So it would be more likely for the system to produce terrestrial planets.

Laughlin also noted that a number of factors make Alpha Centauri B a good candidate for astronomers to actually detect an Earth-sized terrestrial planet.

The Doppler detection method, which has revealed the majority of the 228 known extrasolar planets, measures shifts in the light from a star to detect the tiny wobble induced by the gravitational tug of an orbiting planet.

According to Laughlin, five years of observations using a dedicated telescope would be needed to detect an Earth-like planet around Alpha Centauri B. If astronomers do dedicate substantial resources to detecting an Earth-like planet, this is the star to focus on, he added.

"We're advocating that there's a strong possibility a planet could be there," he said.

Other stars are thought to harbor Earth-like planets, and solar systems like ours are starting to be found. Astromoners announced last month the discovery of a solar system with striking similarities to ours.

If such a planet is found, spacecraft, such as the proposed Terrestrial Planet Finder, could be launched to find out more information about the world, such as whether or not it had water on its surface, Laughlin said.

Study co-author Debra Fischer of San Francisco State University is leading an observational program to intensively monitor Alpha Centauri A and B using the 1.5-meter telescope at the Cerro Tololo Inter-American Observatory in Chile. The researchers hope to detect real planets similar to the ones that emerged in the computer simulations.

"I think the planets are there, and it's worth a try to have a look," Laughlin said.