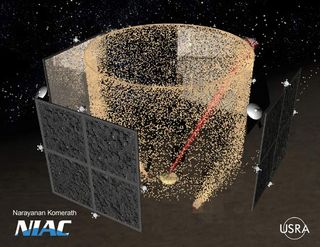 Large, massive structures could be built in space simply by using radio waves that create force fields to move materials and assemble them into various structures.
(Image: © Narayanan Komerath/Georgia Tech/NIAC)

Now whip wildly via a gravitomagnetic force in a rotating superconductor while standing by for Alcubierre warp drive in higher dimensional space-time.

So you're looking for the latest in faster-than-light interstellar travel via traversable wormholes? That's one theme among many discussed at Space Technology & Applications International Forum (STAIF),  a meeting held here Feb. 12-16 that brought together more than 600 experts to thrash out a range of space exploration issues.

Along with the run-of-the-mill space debates of the day, STAIF has also become a respected venue for researchers that dabble in the exotic, the thought-provoking novel, or the downright weird anomaly.

"We're hoping that nature has left a door open," said John Brandenburg of the Florida Space Institute in Orlando, Florida. "If we just find the right door ... we're trying every door knob. One of these days we'll find an open door."

Brandenburg gave a status report on his research into Gravity-Electro-Magnetism (GEM) unification theory. His motivation to poke around in this kind of arena is driven in part by maybe snagging a Nobel Prize, he said, but added: "We not only want to see this stuff...we want to ride in it."

For the most part, the search for breakthroughs in space power and propulsion is akin to walking along the beach, hoping to find that doubloon-a gold coin-gleaming in the Sun, Brandenburg told SPACE.com. "By the way," he said, "I live in Florida ... and that happens occasionally. So we're trying to get lucky."

Finding a pony in the pile

There is no doubt that anybody delving into warp drives and wormhole travel should expect a bit of a skeptical eye from others in certain scientific circles. Getting a hearing for the out-of-the-ordinary inspiration is tough.

"We've got to think about everything possible that there is to think about," said Eric Davis of the Austin, Texas-based Institute for Advanced Studies. "We have got to turn over every stone," he said, "and look into the future to find out what's waiting for us. What can physics do ... where should physics be going?"

To help explore that question, a forum is a legitimate place to present new thinking.

"Otherwise, we may never find it," said Dana Andrews, chief technical officer for Andrews Space in Seattle, Washington. He was an early advocate for having STAIF become a watering hole for challenging, non-traditional proposals.

The outlook that all physics has been discovered doesn't resonate well with Andrews. "I'm of the opinion that things like dark matter, dark energy, vacuum point energy...there might be a pony in that pile. And unless we invite people to think outside the box, we may never find the pony."

As example, a new exact solution of Albert Einstein's 90-year-old gravitational field equation was offered at STAIF by physicist Frank Felber, Vice President and co-founder of Starmark, Inc., based in San Diego, California.

And after you follow a blitzkrieg of his equations, Felber predicted that space travel near the speed of light is attainable-and not too far off in the future.

"I believe this new solution represents a major advance for space propulsion, in that it addresses the major engineering challenges of providing enormous energy to a payload quickly with negligible stresses," Felber later told SPACE.com.

Although all such projections are inherently risky, Felber explained, he figures that the first mission to accelerate a massive payload to "a good fraction" -meaning 10 percent or more-of the speed of light might be launched before the end of this century.

"The solution also offers immediate opportunities over the next couple of years to test Einstein's theory of gravity rigorously in the regime of relativistic speeds, where it has never before been tested," Felber noted. At less than one percent of the cost of space experiments -- like the recently completed Gravity Probe B mission-laboratory experiments can be conducted to demonstrate "antigravity" and test Einstein's theory, he said.

From rest to relativistic speeds

"In order to do this, I figured I needed to know the gravitational field of relativistic mass, since most of the mass in the Universe is moving away from us at relativistic speeds," Felber explained.

His analysis found that a mass moving faster than 57.7 percent of the speed of light will gravitationally repel other masses lying within a narrow "antigravity beam" in front of it. The closer a mass gets to the speed of light, the stronger this antigravity beam becomes. Thus, the forward antigravity field of a suitably heavy and fast mass might be used to propel a payload from rest to relativistic speeds, Felber explained.

Cole worked over the past several years in the Propulsion Research Center at Marshall supporting several advanced propulsion concepts and experiments, and is now reassigned to support work for NASA's Crew Launch Vehicle.

Regarding new propulsion ideas, Cole added that there's room for surprises. He said that novel concepts presented at STAIF are the by-products of people wanting to help move humans beyond the Earth's environment out into the solar system.

"If we ever want to get to the stars...we can't do that with chemistry," Cole told SPACE.com.

Similarly, there are also drawbacks to nuclear systems, even fusion concepts, Cole said, for pushing humanity outward toward the stars. "If you are going to do that in a reasonable amount of time, something exotic has got to be found," he advised.

Not enough signal in the noise

Cole said that those at STAIF presenting exotic ideas are racking their brains...finding "little niches or peculiarities" in the hopes of insight and possible breakthrough. "But they are advocates...so it's hard not to drink your own bathwater."

Scientific rigor is important, Cole said, and repeatable experiments must rule the day.

"Right now, there's not enough signal in the noise to be convinced that there's anything there. One has to be strongly skeptical of all these kind of things," Cole said. "But you have got to be open-minded too. Maybe somebody will find something. But if they do, it has got to be solid."

No stranger to ground-breaking ideas is Bob Cassanova, Director of the NASA Institute for Advanced Concepts (NIAC) in Atlanta, Georgia. NIAC is steadfast in its search for revolutionary aeronautics and space concepts that could dramatically impact how NASA develops and conducts its missions.

One new NIAC-supported concept, for instance, is building large, massive structures in space simply by using radio waves that create force fields to move materials and assemble them into various structures.

"It's important for people to get together and expose their ideas to the scientific community ... and get back credible feedback," Cassanova said. While he didn't experience any "ah-ha" revelatory moments at STAIF, brainstorming and open discussion is key, he said, to help flesh out a sound idea from speculation.

But Cassanova cautions: "Just because you can write an equation that describes something ... doesn't mean that such an equation describes the real physics that are going on."

Cassanova noted that a number of the STAIF-presented concepts have not been confirmed experimentally. In some cases, requisite power and massive pieces of equipment, as well as adequate funding are unavailable to researchers in order for them to carry out a cutting-edge experiment.

NASA's own Breakthrough Propulsion Physics Project was axed in late 2002.

That fact ties into the NASA of today that has slid back to heritage technologies, observed Davis of the Institute for Advanced Studies. The ability to put some "oomph and might" into expanding humankind's presence into the solar system has been "thoroughly destroyed by this heritage concept."

"We can pick ourselves up off the ground and start using advanced, high-efficiency, high-powered, high-speed propulsion," Davis said, "to make access to space much more effective and much easier to do."

Be it laser beam propulsion, gravity modification, extracting energy from a vacuum, or traversable worm holes and warp drives-these and other concepts deserve attention, Davis said.

"It's important," Davis concluded, "because the future is everything."