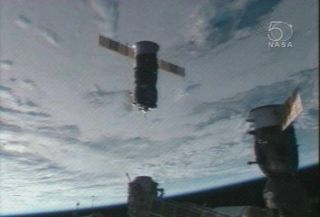 The Russian space freighter Progress 28 closes in for a Feb. 7, 2008 arrival at the Pirs docking compartment (bottom) of the International Space Station.
(Image: © NASA TV.)

?We havecontact,? said Expedition 16 flight engineer Yuri Malenchenko, a Russiancosmonaut who watched over the incoming space freighter and stood ready to takeremote control should it stray off-course.

But theRussian-built Progress 28 arrived at its orbital berth without incident,completing a three-day journey that began with anearly-Monday launch from the Central Asian spaceport of Baikonur Cosmodromein Kazakhstan.

The stationcrew is also preparing for the arrivalof space shuttle Atlantis, which is counting down toward a planned 2:45p.m. EST (1945 GMT) launch today from NASA?s Kennedy Space Center in CapeCanaveral, Fla. The shuttle is slated to dock at the ISS on Saturday.

Commandedby veteran shuttle flyer Stephen Frick, Atlantis will deliver the EuropeanSpace Agency?s (ESA) Columbus laboratoryto the ISS in the first of up to five planned construction flights to the stationthis year.

The shuttleis also bringing up ESA astronaut Leopold Eyharts, who will replace Tani as amember of the Expedition 16 crew. Tani has lived aboard the space station sincelate October, though his stay has been extended by two months following Atlantis?December launch delays.

Tani andhis fellow Atlantis crewmates are slated to return to Earth on Feb. 18 if today?sshuttle launch lifts off as planned.