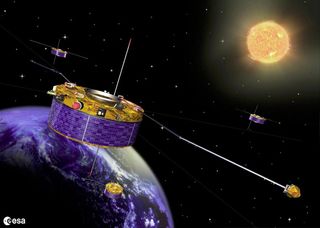 New discoveriesabout magnetic field lines and the first-ever direct observation of their reconnectionin space are offering hope that scientists will learn how to unlock fusionpower as an energy source in the future.

Spacecontains magnetic fields that direct the flow of plasma, an energetic fourthstate of matter consisting of positive ions and electrons. The plasma particlesnormally follow the paths of the magnetic field lines like streams of carsfollowing highways.

Magneticreconnection can release that stored energy when two magnetic field lines bendtowards each other and fuse to createnew field lines. The effect is not unlike an earthquake forcibly realigningparallel highways into perpendicular routes and channeling cars along the newlycreated paths. Although some released plasma energy travels in a straight line— called a super-Alfvenic electron jet — other plasma particles fan out asthough escaping the opening of a trumpet.

The effectnot only fascinates astrophysicists but also frustrates efforts on Earth to createsustained energy sources through fusion.Experimental fusion reactors force atomic particles to fuse together andrelease energy as plasma. The plasma is contained within a "magneticbottle," or a cage of magnetic field lines, so that the high plasmatemperatures can maintain the fusion reaction.

However, magneticreconnection can break the magnetic bottle and allow plasma to reach the colderwalls of the reactor where fusion will not sustain itself.

Drakebecame interested in the topic when he looked at early fusion studies andrealized how many theories at the time were ?dead wrong? about magneticreconnection. To learn more about the phenomenon, he had to look beyond Earth.

?I startedrealizing some of the best magnetic reconnection data is in space,? Drake said.

During asabbatical at the University of California-Berkeley, the theoretical physicist happenedto work in the same office as Tai Phan, anobservational physicist who was looking at magnetic field data from theEuropean Space Agency?s Cluster satellites.

?I wasdoing theory, Tai was doing data and we suddenly saw this correspondence,?Drake marveled. ?It was purely accidental.?

The fourCluster satellites crossed through a turbulent plasma region just outsideEarth?s magnetic field in January 2003, when they happened to run into an areawhere magnetic reconnection had occurred. Physicists thought such areas, knownas electron diffusion regions, were just over six miles long and so spacecraftwould probably miss them in the vastness of space.

Althoughthe basic physics behind magnetic reconnection remain a mystery, Clusterpromises that future missions have a good chance of further examining thephenomenon. One example is NASA?s Magnetospheric Multiscale mission, which willconsist of four spacecraft that study why the plasma particles can become?unfrozen? or unstuck from the magnetic field lines they normally travel along.Magnetic reconnection is simply the most ?dramatic? example of this, Drake said.

Such an energyrelease amounts to a conversion of magnetic energy into particle energy, whichcan occur in blackhole jets and drivessolar flares. Drake hopes to someday create a computer model that can accuratelydescribe the conversion process — and if scientists can also apply someunderstanding towards improving fusion reactors, so much the better.