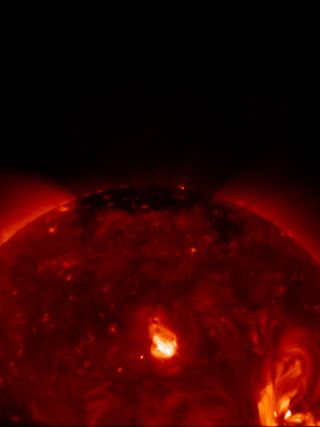 Powerfulmagnetic waves have been confirmed for the first time as major players in theprocess that makes the sun's atmosphere strangely hundreds of times hotter thanits already superhot surface.

Themagnetic waves — called Alfven waves — can carry enough energy from the sun'sactive surface to heat its atmosphere, or corona.

"Thesurface and corona are chock full of these things, and they're veryenergetic," said Bart de Pontieu, a physicist at the Lockheed Martin Solarand Astrophysics Laboratory in California.

The suncontains powerful heating and magnetic forces which drive the temperature totens of thousands of degrees at the surface — yet the quieter corona wreathingthe sun reaches temperatures of millions of degrees. Scientists have speculatedthat Alfven waves act as energyconveyor belts to heat the sun?s atmosphere, but lacked the observationalevidence to prove their theories.

De Pontieuand his colleagues changed that by using the Japanese orbiting solarobservatory Hinode to peerat the region sandwiched between the sun's surface and corona, called the chromosphere.Not only did they spot many Alfvenwaves, but they also estimated the waves carried more than enough energy tosustain the corona's temperatures as well as to power the solar wind (chargedparticles that constantly stream out from the sun) to speeds of nearly 1 millionmph.

However,the chromosphere findings alone could not prove the waves carried their energyinto the sun?s atmosphere.

?If youobserve waves in the chromosphere, that doesn?t mean they can get to thecorona,? De Pontieu told SPACE.com.

Some wavesmay get reflected back down to the sun instead of passing through thetransition region between the surface and atmosphere. Waves that reach thecorona also become more difficult to detect using current instruments, thanksto the long line-of-sight.

De Pontieu?sgroup turned to researchers at the University of Oslo, Norway, who had createda computersimulation representing part of the sun. Once they knew what to look for,the researchers found magnetic waves within the simulation of the corona thatstrongly resembled the Alfven waves directly observed in the chromosphere.

Even as thesimulations helped establish Alfven waves as energy carriers for the sun?satmosphere and solar wind, the new observational findings will help modelerscreate improved sun simulations.

?It goesback and forth — we learn from simulations, they learn from us,? said DePontieu.

Manymysteries remain about the sun?s restless activities. De Pontieu?s groupfocused on Alfven waves generated by the sun?s heat turbulence, but otherresearchers examined Alfven waves generated when the sun?s magnetic field linesstress and snap back together like invisible magnets. That reconnection forcealso creates jets of X-rays that shoot outwards from the sun, as captured by Hinode?sinstruments.

Scientistsstill don?t know which source of Alfven waves plays a more important role inthe heating the sun?s atmosphere, but can use the latest findings as a steppingstone.

?We need tostudy both more, to see which one dominates,? noted De Pontieu. ?But it?s nicefor people to know that Alfven waves can do the job.?