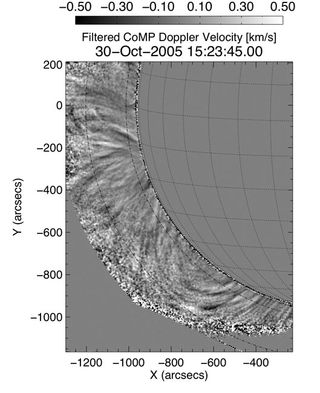 For the first time, scientists have observed elusive oscillations in the Sun's corona, or atmosphere. The Alfvén waves, as the ripples are known, were tracked around the entire edge of the Sun traveling along the sun's magnetic field lines.
(Image: © Steve Tomczyk and Scott McIntosh/NCAR)

Mysteriouswaves that help transport the sun's energy out into space have been detected byscientists for the first time.

Researchershope their discovery of the energetic ripples, known as Alfv?n waves, will shedlight on other solar phenomena such as the sun's magnetic fields and its super-hotcorona, or outermost atmosphere. A newvideo shows the ripples in action.

"Alfv?nwaves can provide us with a window into processes that are fundamental to theworkings of the sun and its impacts on Earth," said Steve Tomczyk, a spacescientist with the National Center for Atmospheric Research (NCAR).

Like a wavetraveling along a string, Alfv?n waves run along the sun'smagnetic field lines and reach deep into space. While astrophysicists haveidentified the waves far away from the sun, they've never been detected closeto our star?the ripples were too small and too fast to spot.

To observethe elusive waves, Tomczyk and his colleagues pointed the coronal multichannelpolarimeter (CoMP) instrument, located at the National Solar Observatory'sSacramento Peak Observatory in New Mexico, at the sun's hot, hazy corona. Thanksto CoMP's imaging speed of one picture every 15 seconds, the scientistscaptured the waves traveling at about 9 million mph (14.5 million kilometersper hour).

"Thewaves are visible all the time and they occur all over the corona, which wasinitially surprising to us," said Scott McIntosh, a space scientist at theSouthwest Research Institute in Boulder, Colo.

The wavesmight help explain how energy is transferred to thesun's corona, which is millions of degrees hotter than the solar surface.

Tomczyk andhis colleagues' findings will be detailed in the Aug. 30 online edition of thejournal Science.