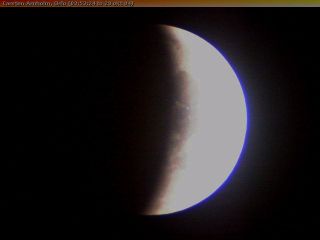 This webcast image showed the Oct. 27, 2004 eclipse prior to the totality phase. It was taken by Carsten Arnholm in Oslo, Norway. The webcast was run by Astronomy.no.

Earth got in the way, blocking sunlight that normally reflects off the Moon.

For skywatchers with clear skies in most of Africa, Western Europe and North and South America, the shadow crept across the Moon over the course of several hours, repeating a geometric phenomenon that frightened ancient cultures, leading to grand superstitions and even affecting war and conquest.

Eclipses are of no particular interest to professional astronomers nowadays, but avid backyard skywatchers try never to miss them.

"It's a spectacular show," said Davis Sherman, who watched it from the Maryland Science Center.

As expected, the Moon never turned completely dark. Light from all the world's sunrises and sunsets was bent during passage through Earth's atmosphere, causing some to fall on the Moon and reflect back.

"What a Halloween Moon," exclaimed one viewer in Northern California, watching sporadically between clouds.

The sky show played out early Thursday in some time zones.

Lunar eclipses occur only at full Moon. But not every full Moon produces one, because the orbit of the Moon is offset in relation to the plane in which Earth travels around the Sun.

Another total lunar eclipse will occur on March 3, 2007, a longer-than-average wait for the next of these erratically timed but fully predictable events.

-- The Associated Press contributed to this story

SPACE.com visitors sent in many great photos of this total lunar eclipse, showing its various stages and the deep red color that developed during totality. Photographers here ranged from an astronomy professor to serious amateurs with expensive setups, people who simply held their camera by hand up to the telescope lens, and some first-time eclipse shooters.