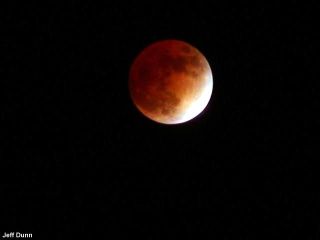 Jeff Dunn of Amelia Ohio took this image of the Nov. 8, 2003 lunar eclipse.

A unique date in the annals of baseball history will be recorded Wednesday, Oct. 27 when for the first time a total lunar eclipse will occur during a World Series game.

Millions of Americans watching Game 4 will also be able to partake in one of nature's most beautiful sky shows, as Earth's shadow begins to cover the Moon during the early innings.

Weather permitting, the eclipse will be visible to fans with a good line of sight at Busch Memorial Stadium. And, if FOX television producers so choose, the potential exists for this to be the biggest audience ever to see a lunar eclipse televised live.

In 1971, night Series games were introduced. But no total lunar eclipse since that time has occurred at just the right time.

There were two close calls during the 1980s.

In 1985, a total lunar eclipse on Oct. 28 came the day after the final game of the World Series between the St. Louis Cardinals and Kansas City Royals. The following year, another total eclipse occurred on Oct. 17. But that was the day before the start of the Series between the New York Mets and the Boston Red Sox.

Even if the dates of these eclipses and World Series games had coincided, it would still have been a moot point since these two eclipses were visible only on the other side of the globe, across Asia.

However, this week's eclipse will favor the Western Hemisphere with most Americans getting a ringside seat.

The St. Louis Cardinals will host the Boston Red Sox at Busch Memorial Stadium in St. Louis. The ball game is set to get underway shortly after 8 p.m. EDT.

The other big event

The Full Moon will begin its passage into the Earth's dark central shadow, called the umbra, just over an hour after the game begins, at 9:14 p.m. EDT. The Moon will be in total eclipse for one hour and 22 minutes starting at 10:23 p.m. EDT.

Eclipses do not produce an entirely dark Moon. During totality the Moon will likely glow with an eerie coppery hue, the result of the Earth's atmosphere acting like a lens and bending reddened sunlight -- the same light seen at sunrise and sunset -- into the Earth's shadow and onto the Moon.

It could also give people in parts of the country that might be plagued by cloud cover a chance at getting a free glimpse of the event.

Probably the last time a lunar eclipse was televised to a large audience was on Aug. 6, 1971. That's when the three astronauts of Apollo 15 trained their camera toward a totally eclipsed Moon while returning to Earth after man's fourth successful visit to the lunar surface.

It cannot be determined when such an unusual circumstance as a total lunar eclipse coinciding with a World Series might again occur.

Total lunar eclipses occur whenever the Sun, Earth and Moon are properly lined up during a Full Moon. Since the Moon's orbit varies about 5 degrees above and below the plane of Earth's orbit around the Sun, not every Full Moon brings an eclipse.

Circumstances of lunar eclipses can be predicted with great accuracy for many years into the future. But the dates and locations of future World Series games are not known.

In fact, the date when the final game of the World Series was played has noticeably moved forward in the fall calendar over the years. In the 1930s, the average date was Oct. 8. By the 1960s, it was Oct. 12. By the 1990s, the typical date of the final Series game had shifted to around Oct. 25.

And yet this year, the Series doesn't even begin until Oct. 23.

Let's assume the Series is played during the final week of October for many years to come. I have found two potential dates when another total lunar eclipse visible in the Americas might again coincide with a World Series game. Interestingly, both eclipses occur on the same calendar date: Oct. 29.

But many people reading this won't see them: The first opportunity comes in the year 2050 and the second in 2069.

And who knows? By the time those eclipses come, Major League Baseball officials might have slated the World Series for the middle of November, and perhaps it will live up to its name and be played in other parts of the world.

Joe Rao, a veteran of 12 total lunar eclipses, serves as an instructor and guest lecturer at New York's Hayden Planetarium. He writes about astronomy for The New York Times and other publications, and he is also an on-camera meteorologist for News 12 Westchester, New York.