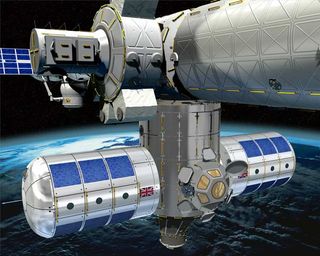 Twohabitation modules emblazoned with the United Kingdom?s Union Jack could launch to the International SpaceStation (ISS) by 2011 under a new plan devised by British scientists andengineers.

Theproposal — not yet official with the ISS partnership — would not only improveliving conditions on board the space station, but would also allow the United Kingdom to join other nations that have afoothold in space.

?I don'tthink there's an excuse for us not to be engaged in manned launches,? said MarkHempsell, aeronautical engineer at the University of Bristol and lead author on the proposalpublished in Spaceflight magazine.

Theproposed HabitatExtension Module (HEM) would consist of two modules attached to the ISSNode 3 segment, a hub-like connecting module slated for a 2010 launch. TheBritish addition would provide additional room and equipment for a permanentspace station crew of six, as opposed to the current crew of three. The stationis scheduled to shift to six-person crews in 2009, NASA officials have said.

BecauseNASA plans to retire the space shuttle by 2010, the HEM modules would launch ona Russian-built Soyuz-Fregat rocket in 2011 at the earliest. Once in orbit, themodules would use their own propulsion system to reach ISS.

AlthoughISS has plenty of experimental space for conducting scientific research,earlier plans for expandedliving space were scrapped. The HEM modules would resurrect thosefacilities and provide enhanced protection for astronauts against spaceradiation.

Each moduleis a cylinder 12.5 feet (3.8 meters) in diameter and 18.7 feet (5.7 meters)long. The two modules would add 3,531.5 cubic feet (100 cubic meters) of livingspace, doubling the room provided by Node 3. They would include a communal areaand six crew rooms with a radiation protection equivalent to 20.5 pounds oflead per square foot (100 kilograms of lead per square meter).

The moduleswould also deliver about three tons of supplies and experiments when theyarrive to help keep the space station running.

?It?s doingtwo things,? Hempsell told SPACE.com. ?Britain would make a contribution while also delivering a load oflogistics equipment, and paying for the running costs and supplies.?

That wouldcost the United Kingdom approximately $1 billion (530million British pounds) to build, launch, and run the HEM modules until 2015,when the currentoperating life for ISS ends. The British Interplanetary Society supportsthe proposal, but the government has yet to seriously latch on.

?TheBritish government keeps saying it?s aware, but it?s not actually saying it?sgoing to do anything about it,? Hempsell said.

Analternative proposal would simply use the Russian ?astronauttourist route? to launch British astronauts and some experiments intospace, at the cost of just $31 million (16 million British pounds). However,Hempsell noted he was much more ?enamored? of the bolder approach.

The United Kingdom currently makes no contribution toISS and is not involved in the European Space Agency?s activitieson space station. For instance, the British opted out of contributing tothe EuropeanColumbus module that is scheduled to launch with space shuttle Atlantis inFebruary.

The Britishflag is currently displayed on the ISS Destiny module only because the nationsigned the Space Station Agreement. Hempsell wants to see the United Kingdom take a more active role that wouldallow its scientists to participate in space-based research.

Current ISSparticipants such as the United States seemcautiously open to a serious British effort.

?If the British National Space Center decided it was something they wanted to do, NASA would lookat the feasibility in terms of power, crew size, and propulsion,? said John Yembrick,a NASA spokesperson at the agency?s Washington, D.C., headquarters.

?Ingeneral, we support all our national partners,? Yembrick added.

For now,Hempsell and his peers hope the idea will spur British space efforts as a newspace race heats up across the globe. On the question of whether to takeaction, ?the answer ?nothing? is the wrong answer,? Hempsell said.