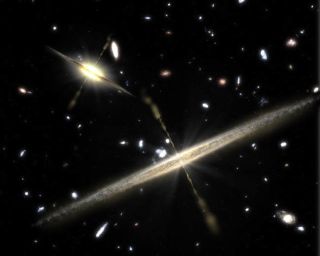 Until now,astronomers had thought central concentrations of stars called galactic bulgeswere required for black holes to grow. Our own Milky Way, like most spiralgalaxies, has such a bulge. In many large galaxies, the bulge feeds bingeeating by theblack hole, creating a chaotic scene of high-speed consumption and copiousradiation.

Newobservations from the Spitzer Space Telescope, however, show galactic obesityisn't the only path to black hole generation.

"Thisfinding challenges the current paradigm," said Shobita Satyapal of the George Mason University in Fairfax, Va. "The fact that galaxies without bulges have blackholes means that the bulges cannot be the determining factor." Satyapalpresented the research here at a meeting of the American Astronomical Society.

Instead,they think dark matter, an invisible substance thought to account for about 85percent of all matter in the universe, might play a role in the earlydevelopment of supermassive black holes.

Forinstance, our Milky Way is a massive disk of stars as seen from above. But ifviewed edge-on it would appear like the shape of an airplane viewed head-onwith its wings extended. The wings represent the galaxy's disk, and the bulbousfuselage would be the bulge.

The mostlydormant black hole at the center of our galaxy weighs several million times themass of the sun. In more active galaxies, black holes can surpass a billionsolar masses. (The record-setter,at 18 billion solar masses, was announced this week.)

"Scientistsreasoned that somehow the formation and growth of galaxy bulges and theircentral black holes are intimately connected," Satyapal said.

Satyapalsuggests these black holes were only recently detected because they have beenshrouded by theirdusty abodes. Galaxies with such minimal midsections tend to be extremelydusty. Infrared light can penetrate the dust, meaning Spitzer could unmask theblack holes with its infrared capabilities.

"Afeeding black hole spits out high-energy light that ionizes much of the gas inthe core of the galaxy," Satyapal said.

Perhaps,Satyapal speculates, the missing piece of the black-hole puzzle is dark matter.Early on in the galaxy's life, this invisible matter might somehow set the massof the black hole. Other theorists have figured in recent years that darkmatter was integral to galaxy formation.

"Maybethe bulge was just serving as a proxy for the dark matter mass," Satyapalsaid. So the amount of dark matter is "the real determining factor behindthe existence and mass of a black hole in a galaxy's center."

The studywill be published in the April 10 issue of the Astrophysical Journal.