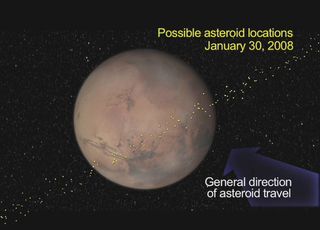 A computer-generated image showing the possible paths of asteroid 2007 WD5. On January 30, 2008, the asteroid may pass through any point seen in the dotted area.
(Image: © NASA/JPL)

An asteroidnearing Mars will not crash into the planet later this month, scientists saidWednesday.

Newobservations of the Mars-bound Asteroid 2007 WD5 have allowed astronomers to refinetheir predictions for the space rock?s position during its red planetrendezvous on Jan. 30, according an update by NASA?s Near-Earth Object (NEO) programoffice.

?As aresult, the impact probability has dropped dramatically, to approximately 0.01percent or 1-in-10,000 odds, effectively ruling out the possible collision withMars,? researchers said in the Jan. 9 report.

The newodds were released one day after astronomers with NASA?s NEO office at the JetPropulsion Laboratory (JPL) in Pasadena, Calif., lowered 2007 WD5?s chancesof striking Mars from 3.6 percent to 2.5 percent, or about a 1-in-40chance, on Tuesday. After analyzing results from a new round of observations between Jan. 5 and Jan. 8, scientists now estimate the asteroid willmake its closest pass by Mars at a maximum distance of about 16,155 miles(26,000 km).

Discoveredlate last year by astronomers at the University of Arizona as part of theCatalina Sky Survey, 2007 WD5 is a 164-foot (50-meter) wide space rock thatcircles the sun on a path ranging from just outside Earth?s orbit to the outerfringe of the asteroid belt between Mars and Jupiter, NASA officials have said.It is similar in size to the object that crashed into northern Arizona to form Meteor Crater 50,000 years ago, the agency has said.

Theasteroid?s Mars approach excitedastronomers since a possible impact could carve a crater a half-mile(0.8-km) in diameter into the martian surface and be observed by a flotilla ofspacecraft currently orbiting the red planet.

NASA?s NEOprogram tracks asteroids and comets for any that may pose an impact risk toEarth. The program?s goal, researchers said, is to identify 90 percent of suchnear-Earth objects that are larger than 0.6 miles (one kilometer) in size andkeep them under surveillance.

?For 2007WD5, these analyses show there is no possibility of impact with either Mars orEarth in the next century,? JPL researchers said.