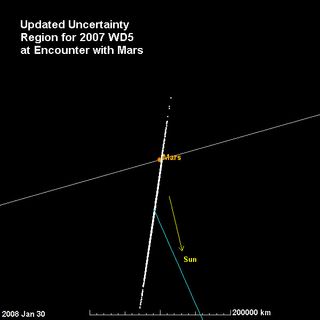 This plot depicts a refined course for the asteroid 2007 WD5 as it approaches a possible impact with the planet Mars.
(Image: © NASA/JPL/NEO.)

Thepossibility of an asteroid walloping the planet Mars this month is whetting theappetites of Earth-bound scientists, even as they further refine the spacerock's trajectory.

The spacerock in question — Asteroid2007 WD5 — is similar in size to the object that carved MeteorCrater into northern Arizona some 50,000 years ago and is approaching Marsat about 30,000 miles per hour (48,280 kph).

Whether theasteroid will actually hit Mars or not is still uncertain.

Such animpact, researchers said, would prove an awesome opportunity for planetary sciencesince NASA's Mars Reconnaissance Orbiter (MRO) and a flotilla of otherspacecraft are already in position to follow up any impact from orbit.

?An impactthat we could witness/follow-up with MRO would be truly spectacular, and couldtell us much about the hidden subsurface that could help direct a search forlife or life-related molecules,? said John Rummel, NASA's senior scientist forastrobiology at the agency's Washington, D.C., headquarters.

Observationsof the asteroid between Dec. 29 and Jan. 2 allowed astronomers to slightlylower the space rock's odds of striking Mars to about 3.6 percent (down from3.9), giving the object a 1 in 28 chance of hitting the planet, according to Tuesdayreport from NASA's Near Earth-Object program office at the Jet PropulsionLaboratory in Pasadena, Calif.

But if WD5does smack into Mars, some astronomers have a fair idea of what havoc it mayspawn. The likely strike zone would be near the equator, but to the north ofthe current position of NASA's Opportunity rover at Victoria Crater, NASA officialshave said.

MarkBoslough, a collision dynamics expert at New Mexico's Sandia NationalLaboratory, said the atmosphere at Mars' surface is similar to that of Earth atan altitude of 12 miles (20 km). Some space rocks that target Earth explodeunder the pressure created as they stream into our atmosphere. But they tendnot to explode until much below the 12-mile mark.

"Sothis won't be an airburst," Boslough said. "It will either hit theground intact and make a single crater, or break up and generate a cluster ofcraters."

Thecollision, were it to occur, could also create a visible dust plume as ejectais lofted high into the martian atmosphere, he said.

Theresulting crater could reach more than a half-mile (0.8-km) in diameter, orabout the size of the Opportunity rover's Victoria home, NASA added.

Boslough'sbreak-up scenario is reminiscent of CometP/Shoemaker-Levy 9, which broke into more than 20 fragments as it nearedJupiter in 1994, then repeatedly pummeled the gas giant over the course of six days.The resulting impact scars were visible to telescopes on Earth, in orbit andNASA's Galileo probe, which was en route to Jupiter at the time of the collision.

LikeGalileo at Jupiter, NASA's MRO probe and its High-Resolution Imaging Experiment(HiRISE) camera would be in prime position for a martian collision. With itsability to resolve objects three feet (one meter) across, HiRISE as been billedas the most powerful camera ever sent to study Mars.

?If theasteroid hits Mars, we?ll get a great look at the crater within a few days ofimpact,? said HiRISE principal investigator Alfred McEwen of the University ofArizona?s Lunar and Planetary Laboratory in Tucson.