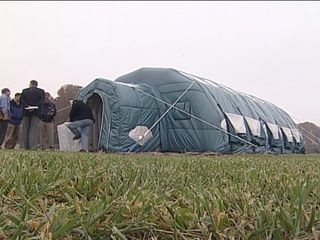 An inflatable prototype for a lunar habitat, on display at ILC Dover's Delaware facility.
(Image: © NASA)

Aninflatable habitat designed for explorers on the moon or Mars is headed for anAntarctic test run, NASA said Wednesday.

Toups andseveral other habitat designers from NASA's Johnson Space Center and ILC Doverwill attempt to deploy the structure in the Antarctic this coming January.Their goal: to use just four people and deploy everything in four hours.Working in bulky cold weather gear will also make the deployment more analogousto the challenges facing astronauts clad in cumbersome spacesuits on the moon.

The habitatprototype will eventually serve as a multilayered test platform for newtechnologies such as health monitoring systems, self-healing materials, andprotective radiation materials. When not inflated, the habitat can save onspace and weight during transportation. It's just one of several models,including another prototype that standson eight legs and has two pressurized cylinders connected by an airlockdoor, under scrutiny by NASA engineers.

Otherresearchers at McMurdo Station in Antarctica will use the inflated habitat as a staging area from January 2008 toFebruary 2009, allowing the designers to monitor its performance using human reportsas well as data from embedded sensors. NASA and the National Science Foundationhope to learn how the habitat material behaves in a cold environment and howwell the structure retains heat and atmosphere.

Toups saidthe field demonstration will show that the structure can be "packaged in asmall volume" but still "expandto a usable, habitable volume," even in an extreme environment. IfNASA likes what it sees, a second or third generation inflatable habitat coulddeploy to the moon as early as 2020, with four-person crews making weeklongtrips to get a lunar base operational.

The U.S. space agency is not alone in considering inflatableliving modules. A private company, the Las Vegas, Nev.-based Bigelow Aerospace,has already launchedtwo inflatable modules into Earth orbit in anticipation of assembling a newspace station by 2012.