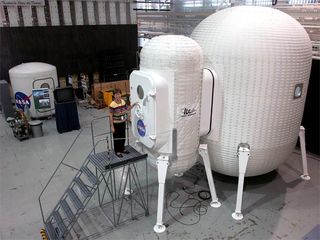 The "planetary surface habitat and airlock unit" was delivered to NASA Langley last October for ground-based evaluation of emerging technologies such as health monitoring of flexible structures.
(Image: © NASA/Jeff Caplan)

NASA ispreparing to test an inflatable structure that might one day be used to establishan outpost on the Moon.

"Right nowit is a concept demonstrator," said Inflatable Structures Project Leader KarenWhitley. "We use it for publicity and tours and exhibits for senior staff.We've had several congressmen come here to see it."

Theinflatable structure is made of multilayer fabric and lookslike an ungainly white robot with legs. The main unit is 12 feet indiameter and 18 feet tall. It has a volume of about 1,600 cubic feet and isconnected to an airlock, also inflatable. The two spaces are essentiallypressurized cylinders, connected by an airtight door.

"We alsowant to look at logistics: how well this is actually going to package up, howmuch mass it actually has, how do you arrange the internal parts [to create]sleeping quarters, walls and floors," Watson told SPACE.com. "Those aresome of the issues we're going to be tackling in the next year or two."

Inflatablestructures are just one of the construction types NASA is considering for anoutpost on the Moon.

"There arequite a few different options that they're looking at," Watson said. "They'renot restricting themselves to expandable structures."

Whitleysays the biggest advantage of expandable structures is they can be compressedinto a small volume for launch.

NASAenvisions a lunar outpost as being a testing ground in preparation for a longerjourney to Mars.

"The ideabehind us having an outpost on the Moon is to give us a chance to practice andlearn before we go to Mars," Watson said. "The Moon is a lot closer...We have theability to try out the technology in a safer environment before we send peopleon a three plus years mission to Mars, where they have no backup."

NASA saystesting of inflatable habitats on the Moon could begin in 2020. As currentlyenvisioned, a lunar outpost would begin with four-person crews making severalseven-day visits to the Moon until their power supplies, rovers and livingquarters are operational.

The missionwould then be extended to two weeks, then two months and ultimately to 180days.

In arelated development, NASA will team up with the National Science Foundation tobegin field testing of a similar inflatable structure in Antarctica either later this year or earlynext year.

NASA facescompetition for setting up a lunar outpost from at least one private company. Austin's Stone Aerospace, Inc, in Texas recentlyannounced plans tocreate a lunar mining station to prospect for frozen water and other resourcesby 2015.

Anothercompany, Bigelow Aerospace, plans to launch free-floating modules to create anorbital habitat that could support visiting crews of up to three people by the end of the decade.