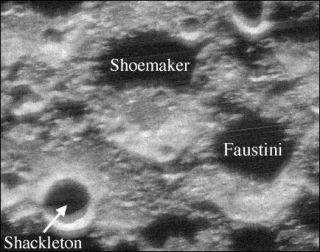 Future home for lunar dwellers? Radar image captures Shackleton crater. Setting up a lunar outpost at the south pole rim of Shackleton is getting high-marks by some NASA planners. This area of near-permanent sunlight on the rim provides access to power and proximity to a cold trap that may contain water ice. The site is on the floor of the South Pole-Aitken (SPA) basin, the oldest and biggest impact feature on the Moon.
(Image: © Bruce Campbell/Center for Earth and Planetary Studies.)

ATexas-based firm has drawn up plans for a manned expedition to the Moon to seek out the raw ingredients forwhat amounts to an orbital gas station for future spacecraft.

Under theplan, from Bill Stone of Austin's Stone Aerospace, Inc, a vanguard team ofindustrialists would explore the ShackletonCrater at the Moon's south pole to determine how much, if any, frozen waterand other materials sits locked beneath the lunar regolith [image].

If enoughresources are found, they could then be processed into spacecraft fuels andhauled into low-Earth orbit (LEO) for propellant-thirsty spacecraft atone-tenth the cost of launching them from Earth,according to the plan.

"Onceinitial funding is received to initiate the detailed planning effort, we expectto be open for business in LEO in the 2015 timeframe," Stone said in astatement, adding that the ambitious plan would likely cost about $15 billionand require significant international partnerships. "Only by operatingcommercially will this enterprise be successful."

To thatend, Stone has formed Shackleton Energy Company (SEC). He discussed his plan ina March 10 presentation at the Technology, Entertainment and Design (TED)Conference in Monterey, California.

"This iswater exploration first," SEC president Dale Tietz told SPACE.comWednesday. "And if it's there, then our whole business plan is based upon, by2015, having a very aggressive program to then process that with our owncrews...bring it to low-Earth orbit and then open for business."

Amongpotential customers for SEC is NASA,which plans to launch astronauts aboard its new spacecraft - the OrionCrew Exploration Vehicle - no later than 2015,with lunar missions slated for 2020. The Virginia-based firm Space Adventures,too, has announced plans in the past for space tourist flightsaround the Moon aboard a Russian-built Soyuz spacecraft.

NASA'splans for crewed flights to the Moon, coupled with other programs indevelopment by China,Russia, India and a host of space tourism firms, led the Shackleton CraterExpedition's announcement, Tietz said.

"If we havefuel up there at a reasonable price, they will come," he added.

Etched intothe south pole of the Moon, Shackleton Crater is 12-miles (19 kilometers) widewith a floor perpetually cast in shadow, though regions of its rim are nearlyconstantly bathed in sunlight.

Scientistshave long thought the crater, and others like it [image]that serve as cold traps, are the most likely hunting ground for buried waterice on the Moon based on data from NASA's Lunar Prospector mission and the U.S.Pentagon's Clementine Moon orbiter [image].If present, such resources could be separated into liquid oxygen and hydrogenthat serve as modern rocket fuel. Shackleton Crater, in particular, has been anattractivefocus for possible future Moon bases among experts in and outside of NASA.

Stone'splan calls for a privately-funded industrial team would to set up base camp ininflatable structures on Shackleton's sunlight rim, burying the habitatsbeneath the lunar regolith for heat insulation and radiation protection.

Thescenario is based, in part, on a 2003 proposal entitled "The Shackleton CraterExpedition: A Lunar Commerce Mission in the Spirit of Lewis and Clark" andrejected by the Bush Administration, Stone Aerospace officials said. Inaddition to water, liquid oxygen and liquid hydrogen, an SEC refueling stationcould also possibly offer gaseous hydrogen and oxygen, nitrogen and methane,they added.

NASA chiefMichael Griffin saidin 2005 that a private spacecraft refueling depot in low-Earth orbit, amongother commercial spaceflight services, could aid the U.S. space agency's futuregoals of returning astronauts to the Moon. The U.S. space agency is activelypursuing activities with several private firms,among them California's SpaceExploration Technologies (SpaceX) and Oklahoma's RocketplaneKistler, to support future crew and cargoservices to and from the International SpaceStation.

"We have along way to go," Tietz said. "But we have a plan and we think we can execute itif we have the right kind of relationships and funding."