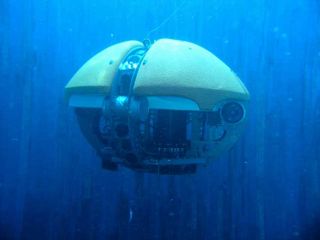 It's robotic,aquatic and ramping up for a long, deep dive, all to test technology that couldone day allow its autonomous descendants plunging into alien waters believed tosit beneath the icy crust of Jupiter'smoon Europa.

"The factthat it did it and came home each time, it's like the clouds parted," saidStone Aerospace chief Bill Stone, DEPTHX principal investigator, of the robot'searly success. "I've been doing this 27 years and I was blown away."

Stone andhis team are priming DEPTHX to take the ultimate dive down El Zacat?n, awater-filled geothermal sinkhole - or cenote - in Mexico known to reach depthsbeyond 925 feet (282 meters), though its true bottom has not beendetected by either human divers, robots or sonar [image].That expedition is slated for May.

Theresearch is part of a $5 million NASAstudy to develop technology that could one day allow a waterborneexplorer to probe the vast unknown ocean thought to lurk beneath the miles-thickcrust of ice covering Europa. The cracked,icy Jovian moon has been billed one of the solar systems' besthunting grounds for extraterrestrial organisms.

Researchers at Stone Aerospace, Carnegie Mellon University, the Colorado School of Mines, University of Colorado and Southwest Research Institute are participating in the DEPTHX project, which is funded by the Astrobiology Science and Technology for Exploring Planets program within NASA's science directorate.

Despiteweighing in at a hefty 1.3 tons, DEPTHX's design keeps it neutrally buoyant inwater, allowing the 8.2-foot (2.5-meter) wide robot to maneuver in threedimensions (up, down and side-to-side) with the aid of six thrusters [image].Because no one knows for sure how deep the El Zacat?n cenote goes, the vehiclehas been built to dive to a depth of about 3,280 feet (1,000 meters),Stone said.

DEPTHX isarmed with 36 onboard computers, 56 sonar sensors and a suite of depth,guidance and velocity sensors to find its way through the murky waters of LaPilita or El Zacat?n.

"It's kindof the chicken and the egg," said DEPTHX project scientist George Kantor, of Carnegie Mellon University whereresearchers developed the robot's SLAM software. "As it builds the map,it can actually use that map as it moves around."

Early testsDEPTHX tests 3-D mapping system revealed an underwater tunnel 98 feet (30meters) below the surface of the 98-foot (30-meter) wide La Pilitacenote, though the system should be put through its paces in full in theupcoming tests, Kantor said. Other autonomous tests using dead reckoning andsonar navigation have proven successful, he added.

"Whenyou're working on Europa....there is not going to be any guidance from MissionControl," Stone said. "They're all going to be sitting back there sweating, andhoping they didn't mess up some line of code."

NASAdemonstrated as much lastweek when its New Horizons probe swungpast by Jupiter on Feb. 28, relying on a series of preloaded commands tostudy the planet and its moons due tothe 45 minutes it would take a signal to cross the millions of miles between Earth and the gasgiant.

"Ourcruising speed is about 0.2 meters per second (about half a mile per hour),"Kantor said. "That's not going to work on Europa, where you're going to want tobe moving a lot faster."

Finding your wayaround obstacles or rocky walls in a pitch-black cenote - or the waters ofEuropa, for that matter - is just the first step for DEPTHX researchers, whoare hoping to develop autonomous science capabilities for the aquatic robot -especially those useful for studying microbiology.

"The hattrick beyond what we've already done is to give it the ability to sniff outenvironmental variables, gradients in the environment's chemistry, that wouldsuggest something is going on," Stone said.

DEPTHXcarries a probe-like appendage [image]capable of retrieving solid samples during dives and contains space for up tofive two-liter water samples from different locations around cenotes like LaPilita or El Zacat?n. The robot also sports cameras to scan for color changesin rock walls and an onboard microscope to detect moving cells, a hallmark ofliving microorganisms, researchers said.

For Spear,DEPTHX's potential as a pathfinder for a Europa probe is a bit of a bonus. Therobot's technology could also be adapted to explore any number of environmentson Earth, from the depths of the planet's oceans to the deep lake bottoms belowAntarctica.

The key,Spear added, is developing the capability of overlaying science observations -such as changes in water sulfide content - with SLAM location maps to pinpointtheir respective positions.

"When youwalk up to a hot spring, you see it, you smell it, you can feel it and tasteit," Spear said. "We needed to develop a machine that's capable of doing thesame thing I can. We had to give the machine senses so to speak."

For Stone,DEPTHX's big test comes in May, when the robot will put its navigation andscience capabilities to the test at El Zacat?n.

"The two goalsare there," Stone said. "I think we're going to hit them."