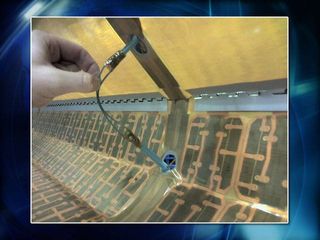 Cobbled Cuff link: An improvised fix, such as this 'cuff link' built from spare parts, may stabilize a torn power-providing solar array on the International Space Station during the joint STS-120-Expedition 16 mission.
(Image: © NASA.)

In 1970,the solution involved duct tape, a flight manual's cover, a plastic bag and asock.

Three yearslater, it was a nylon and mylar umbrella that was assembled with a sewingmachine. In 1985, although unsuccessful, the answer was two makeshiftflyswatters.

And onSaturday, should NASA proceed as planned, the success of its current mission willrely on six cuff links.

But it'snot like the 10 astronauts in space can rent the fasteners from the localtuxedo shop. To save the space station on which they all currently inhabit,they needed to assembletheir repair tools from the spare parts launched for just such anoccasion.

Earlierthis week, after successfully repositioning a truss and solar array assembly toits permanent berth on the International Space Station (ISS), the crew of shuttle Discoveryand the outpost's own residents set about deploying the segments' pair ofpower-generating wings. The first array extended without issue, but as thesecond was almost at its full length, the station's commander halted the deployafter observinga tear that was forming mid-way along its 110-foot (33 meter) length.

The damage,which upon closer inspection was found to be two tears -- a 2.5-foot (0.7-meter)rip and another about one-third the size -- was a serious concern. The ISS wasalready at a power handicap as a faulty joint was preventing one set of itsarrays from rotating to track the Sun. Now, with the second set of arraysunable to extend completely, it too would be unable to follow thepower-providing rays of our nearest star. Although there was enough electricityto support its current configuration, without repair, the torn wing wasthreatening future expansion, including the long awaited launch of European andJapanese science labs.

Flightscontrollers quickly went to work around the clock to develop a daring plan:using a 50-foot (15-meter) boom designed to inspect the shuttle for damage andthe station's own 50-foot robotic arm, an astronaut will be positioned at thesite of the tear, where he will attempt to clear a snagged guide wire believedto be the source of the damage, and then repair the torn hinge by insertingsplints, referred to as cuff links, to stabilize the array such that it can befully extended. Were it not enough that the boom has never been used for such apurpose, or that the astronauts were never trained for such a maneuver, thearray, though torn, will still be running a current such that it poses a lowbut real risk of shocking the spacewalker.

Well beforeDiscovery launched to space on Oct. 23, STS-120 commander Pam Melroy dubbed oneof her six crewmates as the astronaut version of the resourceful TV characterMacGyver. Speaking of her mission specialist from the European Space Agency,Melroy recalled telling Paolo Nespoli to take all his tools with him to space.

"Iencouraged him to take one of everything because I am sure he's going to buildsomething in space with it."

As chancewould have it, Melroy would be partially right. Though Nespoli will supportScott Parazynski and Doug Wheelock during the spacewalk from his vantage pointinside, it was Discovery's pilot George Zamka along with ISS Expedition 16commander Peggy Whitson who were called upon on Thursday to exhibit theirinner-MacGyver.

Usingstrips of aluminum, a hole punch, a bolt connector and 66 feet (20 meters) ofwire, along with detailed instructions sent by mission control, the duoassembled half a dozen space station-saving cuff link contraptions. If allproceeds as planned, Parazynski, suspended at the end of the boom-arm assembly,will slip the cuff link-like tabs through holes in the array's blanket,enabling it to support the tension exerted when the solar wing is fullyextended.

Like thesock/duct tape/plastic bag solution that allowed a square-shaped carbon dioxidescrubber to fit in around hole aboard Apollo 13, the success of the cuff links won't be knownuntil they are installed, but those who worked to devise the fix are optimisticthat failure is not an option.

"We'refaced with a difficult situation," said experienced spacewalker DavidWolf. "I think we're onto a solution that should work and get us prettyclose to a permanently acceptable situation."

Howexactly does one assemble a space station saving cufflink from spare parts?Very carefully, as appears to be the case in the seven-partinstructions that were uplinked to the astronauts, complete with illustrationsfor key steps.